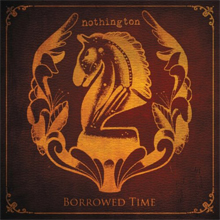 Despite another lineup shift, Nothington deliver another batch of reliably solid, gruff punk that’s big on hooks and short on filler. Borrowed Time, the band’s third album, won’t set the world on fire with its originality, but the manner in which Nothington take a tried and true formula to larger, louder heights is impressive. Now a trio in which Jay Northington (ex-Tsunami Bomb) and Chris Matulich (ex-Enemy You) split vocal duties, the band use the two distinct voices to their advantage. Northington’s weathered yell—think Social Distortion’s Mike Ness—anchors his contributions (“Where I Can’t Be Found,” “To Hold On”), while Matulich’s voice is more melodic and less dominating, which make the vocal hooks easier to find (“The Escapist,” “Ordinary Lives”). Borrowed Time is at its most dynamic when the two collaborate, however (“Far To Go,” “End Of The Day”), giving credence to the notion that two complementing vocalists are better than a singular voice.