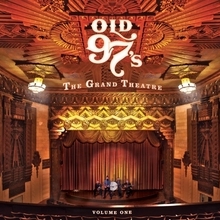 The Grand Theatre Volume One

Old 97’s vocalist Rhett Miller has always been a prolific songwriter. Barely a year since Miller’s third solo album dropped, and two years off the release of the 97’s’ Blame It On Gravity, the alt-country heartthrob found time to write over two dozen new tunes. The result: The Grand Theatre Volume One (be on the lookout for volume two next year). “The Magician” will pack a wallop live, in the same way the classic 97’s songs “Doreen” or “Timebomb” do, with rock-solid guitar melodies and a heart-racing rhythm. Undoubtedly the most unique song on the album, “Champaign, Illinois” takes the melody from Bob Dylan’s “Desolation Row” and adds a new perspective with Miller’s lyrics about the god-fearing, blue-collar, Midwestern mentality. No Old 97’s record is complete without a song or two from bassist Murry Hammond. His vocals on “You Were Born To Be In Battle” are the next best thing to Johnny Cash crooning a story of pride and heroism. Seventeen years and eight albums into their career; The Grand Theatre Volume One is a welcomed second wind.