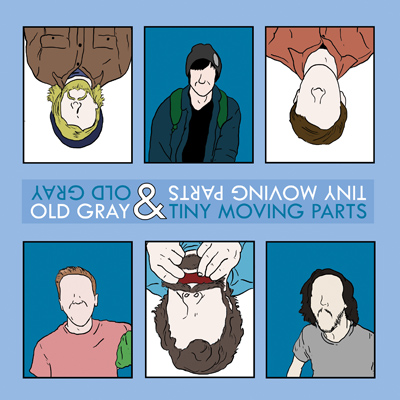 Post-hardcore has so many incarnations nowadays that it’s almost—but not quite—become as nebulous a genre as “emo.” Take, for instance, this split between New Hampshire’s Old Gray and Minnesota’s Tiny Moving Parts, which offers up two distinct, yet equally valid and rousing takes on the form. The two Old Gray tracks see soaring, shimmering, Explosions In The Sky-esque guitars provide the ledge from which unashamedly confessional lyrics jump off into the abyss, courtesy of some agonized, urgent vocals. “An Epitaph” is more frenzied and desperate than “Clip Your Own Wings,” but both are true expressions of emotional catharsis and are shockingly powerful.

The two songs Tiny Moving Parts contribute are just as fraught emotionally, but have a very different constitution—on both “Swimming Lessons” and “Fair Trade,” Kinsella-inspired guitar lines intertwine as words more spoken than sung (think La Dispute or Listener) deliver impassioned confessionals about loneliness both lovelorn and existential. Combined, these four songs provide a riveting example of how varied—and how strong—the scene is right now.