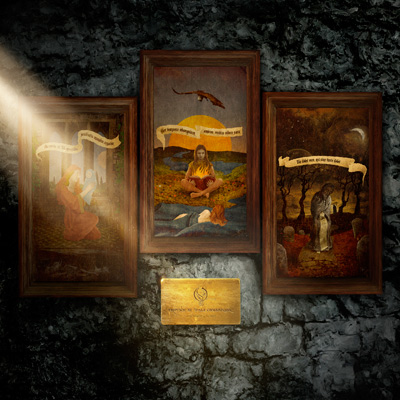 On 2011’s Heritage, the 10th full-length of a career dating back to 1990, Opeth stepped away from their metallic origins and strode into the prog-rock territory they had flirted with over their preceding releases. While it had some solid songs and was at heart still an Opeth record, it was hard to escape the feeling that it was rather self-indulgent, making it at times hard to invest in. With Pale Communion, they continue to follow a prog-rock vein, but by focusing much more on melody it is a far more rounded, involving and engaging collection.

Though the majority of songs are still guitar driven, organ and synthesizer are just as prominent, if not more so, whether in lending atmosphere and depth, weaving a playful melody or adding an emotional counterpoint that enhances a song’s unique impact. Opener “Eternal Rains Will Come” embraces all three dimensions, its jarring rhythms and haunting harmonies somewhat confrontational before giving away to a frail melancholy that is every bit as moving. Not one song on Pale Communion evokes just one emotional reaction, often pulling you in opposing directions, which at times detracts a little from the overall affect but is just as often devastating. At nearly 11 minutes long, “Moon Above, Sun Below” is perhaps the lynchpin of the record, evoking dark, doom-laden imagery, anger and acceptance, which might be hard to take in if it were not so finely crafted. “River,” which initially recalls Alice In Chains during their Sap era, is by far the “prettiest” of the songs, and is suffused with potent warmth and charm before breaking into a funky rock-out Lalo Schifrin would be proud of, once again emphasizing diversity and the players’ keen ability to weave together such contrasts. Holding it all together is the voice of Mikael Åkerfeldt, who continues to eschew the gruff growls of Opeth's earlier records, crooning and howling his way through the album. His intonations write as much of the story as the lyrics themselves.

For fans of classic prog-rock with plenty of noodling and convolutions, there is a lot to love on Pale Communion. Those hoping the Swedish quintet would return to the weightier pre-Heritage sounds should not necessarily dismiss Pale Communion, for it is still very much the work of Opeth, and maintains the exploratory traditions that added so much depth and character to their earlier releases. At times some reining in might have been desirable, but 11 albums in, it’s hard to argue Opeth have earned the right to do whatever the hell they want.