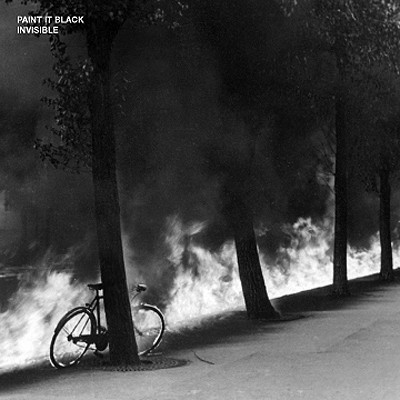 Invisible marks the first batch of Paint It Black material in nearly four years, a six-song EP that may appear frustratingly abbreviated, but is actually viewed as a complete release by the band. (Savor it, because as frontman Dan Yemin recently told Brooklyn Vegan, “the album is a dead format” to them.) Nonetheless, despite Invisible clocking in at 11 righteous minutes (maintaining an aesthetic and elapsed-time continuity that began with 2009's Amnesia and Surrender EPs), Paint It Black demonstrate yet again that they can retreat to their personal lives and other, busier bands for extended periods of time and return with material that stacks up against most any of their hardcore/punk peers.

If Invisible is most reminiscent of any point in Paint It Black's catalog, it's 2005's Paradise, with the first two tracks, “Greetings, Fellow Insomniacs” and “Headfirst” chock full of that album's surprisingly warm, major-key melody (with the :34, powerviolence-propelled “D.F.W.” an excellent throwback to their raw CVA days). Having recently entered fatherhood hasn't softened the edges of Yemin's rage, though—it's the opposite, in fact, as he sounds even angrier and more unhinged than usual, as he howls overtop drummer Jared Shavelson's percussive flurry to close “Headfirst,” props up showgoing mush-mouthers as a metaphor for ignorance in “Props For Ventriloquists,” and instills hope in his daughter that she can fight through a culture of sexism and misogyny in the poetic and surprisingly touching “Little Fists.”

Invisible is at once both warmly familiar and impressively fresh for Paint It Black, from unexpected tempo dynamics and stomping beats to playful key changes and guitar-driven, bile-laden textures. Eleven minutes doesn't give a whole lot of room to expand hardcore's boundaries and otherwise perfect its usual tropes, but Invisible's yet another striking example of how close Paint It Black come to accomplishing both in spades.