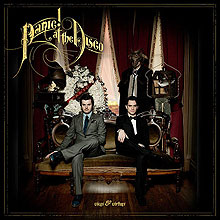 When Ryan Ross and Jon Walker jettisoned Panic! At The Disco in July 2009, a question mark would have been an appropriate addition to the band’s punctuation-accented moniker. After all, Ross had been the group’s driving creative force and primary songwriter since their inception, placing the pressure squarely on the shoulders of Panic’s remaining members—frontman Brendon Urie and drummer Spencer Smith—to fill some positively massive shoes. As it turns out, the pair have handled the challenge better than anyone could have expected.
Outside of the obvious personnel changes, Vices & Virtues is a new start for Panic! At The Disco. Perhaps Smith and Urie’s biggest success on Vices is their disinterest in simply recreating either of their previous albums, instead choosing to meld the youthful exuberance of their debut, 2005’s A Fever You Can’t Sweat Out,with the restraint and maturity of 2008’s Pretty. Odd. Where Fever faltered because of an often-schizophrenic mess of instrumentation, the band have tightened the reins while not abandoning the dramatic, theatrical tendencies that made them stars in the first place. Panic have never shied away from opulence and grandeur, and they’ve dressed up tracks such as “Nearly Witches (Ever Since We Met…),” “Hurricane” and first single “The Ballad Of Mona Lisa” with Elfman-esque string arrangements, creepy undertones and twinkling pianos.
But for all the bombast, children’s choirs and stacks of strings on the disc, Smith and Urie aren’t afraid to scale things back a bit: “The Calendar” (which touches on Ross and Walker’s split from the group and finds Urie declaring, “They say if you don’t let it out/You’re gonna let it eat you away/I’d rather be a cannibal, baby/Animals like me don’t talk anyway”) and “Memories” are the album’s most straightforward cuts, slabs of pop-rock reminiscent of “New Perspective” (Panic’s contribution to the Jennifer’s Body soundtrack) that ultimately come across as a bit too safe for such a sumptuous songwriting team. Even so, the calypso-leaning “Sarah Smiles” (composed for Urie’s girlfriend) and creaky acoustic ballad “Always” are among the disc’s high points yet wouldn’t be out of place on Pretty. Odd.
Many criticized Panic! At The Disco for making the sharpest of left turns with Pretty. Odd. as they all but abandoned their electro-emo roots in favor of a ’70s psychedelic pop reboot. Yet even though Urie and Smith have for all intents and purposes dropped the paisley vests and faux British accents and returned to their classic sound, Vices & Virtues feels sincere, not simply an attempt to reclaim listeners turned off by their last release. (You get the sense that Vices is the kind of album Panic would have made in place of Fever had they been a little more skilled at the time.) In fact, the duo—especially Urie, who turns in some of the premier performances of his career—sound absolutely recharged, likely a result of the lineup shuffling, but also perhaps a realization that the ’70s were a nice place to visit for a couple years, but life in the 21st century is much more fun.

“Nearly Witches (Ever Since We Met…)”