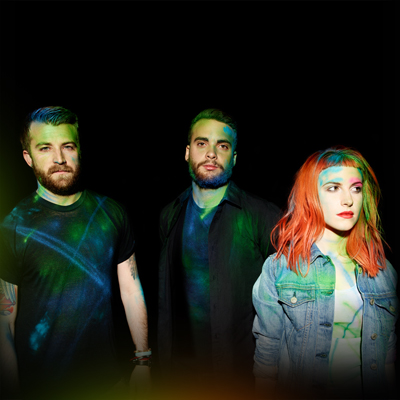 It’s not a huge secret regarding what Paramore went through in the past few years: The Farro brothers, guitarist Josh and drummer Zac, quit the band in 2010, taking with them the primary source of Paramore’s songwriting. An intense creative rebuilding period followed, eventually resulting in what you hear on Paramore, the band’s fourth album, a sprawling, 17-song, 64-minute monster that is without a doubt the finest music these three artists—vocalist Hayley Williams, guitarist Taylor York and bassist Jeremy Davis—have ever made.

The album begins with “Fast In My Car,” a sultry electro-rock number with a strong ’90s guitar-rock vibe—a feeling that pops up repeatedly on Paramore. (“Proof” is cut from similar cloth, as is “Be Alone” and the second half of the breathtaking closer “Future.”) Williams wastes no time spelling out how difficult the past few years have been for her and her bandmates, singing, “Been through the ringer a couple times/I came out callous and cruel/And my two friends know this very well/Because they went through it, too.” (And that’s just the first couplet.) Her confidence continues through first single “Now,” as she repeatedly howls, “If there’s a future, we want it now.” The intra-band tension so prominently on display in the lyrics of 2009’s brand new eyes has disappeared, replaced with a unified front of Williams, York and Davis, willing to try anything.

Producer Justin Meldal-Johnsen (M83, Neon Trees) truly brought out the best in these three, pushing them to create both classic Paramore sounds and try entirely new things. Take the monumentally catchy “Still Into You,” one of the finest tracks on the album: There's no question that this is still Paramore, only it's better. The chorus hook will stay in your brain for days at a time, and Williams' unfettered honesty (“And baby, even on our worst nights/I'm into you”) is endearing, and when you throw in the band's newfound embracing of electronics, you find yourself with what will ideally be one of the biggest hits of 2013. His influence on Paramore is undoubtedly a good one, allowing the trio to explore new sounds and styles.

Really, it’s those moments of diversity that really make Paramore shine. “Ain’t It Fun” is a blast of new jack swing that carries with it a funky swagger never before heard on any Paramore album, replete with a gospel choir who help push Williams to some of her most soulful vocals ever. “(One Of Those) Crazy Girls” is a ’60s pop-rock romp that could have appeared in That Thing You Do!—until you listen to Williams’ cheeky lyrics as she kinda-sorta stalks an ex-flame. It’s lively and fun, and shows a side of her personality she doesn’t get to often display in her lyrics. “Hate To See Your Heart Break” is a bona fide soft-rock ballad that could easily become this generation’s “Landslide”—it’s that potent and well written. (The gorgeous string arrangements don’t hurt, either.) It’s legitimately the kind of song your mom would enjoy, and that should be taken as a compliment: Never before have Paramore created music with potentially this much reach, and at the same time they’re exploring their own artistic boundaries (of which there don’t appear to be many). A song like this speaks volumes for not only where Paramore are now, but where they can go in the future.

And speaking of “Future,” it may start off as a subdued acoustic closer a la Jimmy Eat World’s “My Sundown,” but the fluid transition the song makes into a sustained sonic explosion at the 3:30 mark leads to waves of chills. Williams’ lyrics are sparse (“I’m writing the future… We don’t talk about the past”), and they become nonexistent once she turns the song over to York and Davis, who muscle through it for four-and-a-half minutes, all distortion and screeching guitar leads and crashing cymbals and even a false ending. It’s the kind of song that will rock the foundation of any venue the band play in for years to come, and will likely carry even more emotional resonance as Williams will yield the stage to her bandmates. This song speaks volumes about who Paramore are—a trio of highly motivated, incredibly creative and fearless individuals who have fought their way through endless amounts of squabbling and drama to become adults—and what they are becoming: one of the finest rock bands in America.