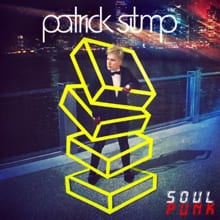 This review originally ran in AP 277.

During “Spotlight (New Regrets),” Patrick Stump sweetly sighs, “Oh, nostalgia, I don’t need you anymore/’Cause the silent days are over, and the beat is at my door.” More than any lyric, that couplet best summarizes Soul Punk, his debut solo full-length. As Fall Out Boy’s vocalist and music composer—but not their lyricist—Stump was merely the conduit for Pete Wentz’s tongue-twisting angst and cheeky wordplay. But on Soul Punk, he’s behind every single turn of phrase, keyboard flourish and crisp rhythm; in other words, he wrote, performed and produced the entire album.

The scope of that responsibility is even more impressive when you consider how polished the album sounds—and how diverse it is. Although Prince (“I In Lie”), Justin Timberlake (“It’s Gonna Get Better”) and Michael Jackson (“Explode”) are obvious inspirations, the album is much more than rote imitation. Horns, handclaps and quirky noises pepper “Everybody Wants Somebody,” while proggy guitar interrupts the torchy piano plinks of “Allie” and the measured falsetto and retro beats of “Dance Miserable” hint at New Jack Swing, the R&B/hip-pop hybrid popular in the late ’80s. Better still is the one-two punch of “Run Dry (x heart x fingers)” and “Greed.” The former boasts a scorching bassline and exploding-confetti synths, while the latter is a high-stepping soul-funk jig.

Freed from Fall Out Boy’s guitar-rock constraints and furious tempos, Stump sounds more confident as a singer. If anything, his vocal turns on Soul Punk are performances, not merely vocal takes. He’s a carnival barker with killer vibrato (“Greed”), an expressive Broadway performer (“Explode”) and a soulful sentimentalist (“This City”). (Stump also has a heavenly falsetto coo, as evidenced by many tunes on the album.) Accordingly, the album’s lyrics are calibrated for the live stage. Songs call for direct action (“Clap if you’ve got a ticket to the end of the world”) and address audience-pleasing topics such as dancing to forget misery or the intricate (and often fraught) relationship between overindulgent drinking and love.

More interesting, several songs (most notably “Spotlight (New Regrets)” and “It’s Gonna Get Better”) seem as if Stump is burying confidence-boosting messages to himself within more generalized encouraging statements. “You can be your own spotlight,” he reassures on the former, while on the latter he notes, “I keep making mistakes, but it takes some time to get anything right.” While self-referential nods were a hallmark of Fall Out Boy, Stump doesn’t come across as precious or saccharine; he’s such an earnest lyricist that these soundbites are charmingly innocent.

Still, it’s almost unfair to compare Soul Punk to Fall Out Boy. Sure, the album’s pop sensibilities, clever phrasing and tight grooves will please fans. But Soul Punk is a brave, bold statement on which Stump asserts his individuality. Its sincerity and positive outlook is refreshing, especially in an era where jaded cynicism and cheap emotions go hand in hand with faceless, digitally manipulated music. With Justin Timberlake content to hone his acting chops, perhaps Top 40 radio could make some room for someone like Patrick Stump. They’d be crazy not to welcome him with open arms.