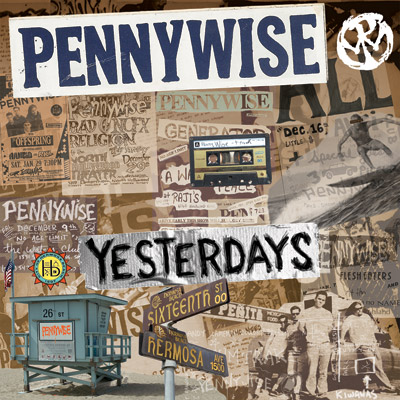 When Pennywise brought singer Jim Lindberg back into the fold, it could have gone one of two ways. Either the band would come out blazing with a stellar new album that would make everyone say, “Zoli who?” or they would take a look at their storied punk-rock past and do some kind of ode to their beginnings. It’s pretty easy to guess which of the two scenarios plays out on Yesterdays, even just based on the album’s title.

So, we get redone versions of songs like “Slow Down,” better known as the bonus track from 1993’s Unknown Road, and “No Way Out,” from the band’s first EP. More importantly, we get new versions of several songs from a 1988 demo tape that were written by the band’s original bass player Jason Thirsk, who took his own life in 1996. While dipping back into these old songs gives the band that fire they had when they were first coming up on the melodic SoCal punk scene, they do sound dated in 2014.

But it’s clear that retro is the whole point here. For instance, the phrasing in “Noise Pollution” is exactly like Minor Threat’s “In My Eyes” and the band are quick to admit it. “Public Defender” sounds like an early Circle Jerks song with no Keith Morris. And the strangely titled “Am Oi!” is a classic mid-tempo-lurch Pennywise stomper that could have been straight off their 1991 self-titled breakout album.

Much like the piss-takes of albums like Slayer’s Undisputed Attitude and Suicidal Tendencies’ Still Cyco After All These Years, this is Pennywise’s version of a fun slice of old-school punk from a band that put the beachfront city of Hermosa Beach on the map in the ’90s. It won’t satisfy the appetite of fans of the band that are salivating over the thought of a brand new album with Lindberg’s patented shout-sing back and leading the charge. But as a stopgap and look back at the band’s early years, Yesterdays is a rowdy Pennywise romp.