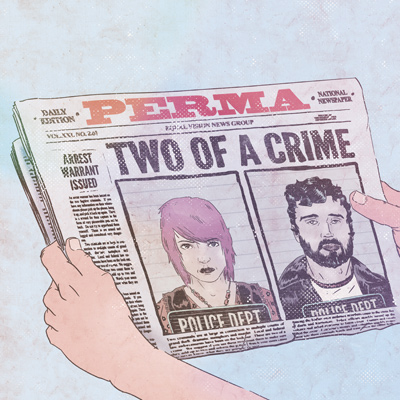 Two Of A Crime

After a few years of successful marriage (and one adorable baby), Max Bemis of Say Anything and Sherri DuPree-Bemis of Eisley have decided to a start band together in which they write love songs to each other. Oh, and the band name is a Bemis’ nickname for DuPree-Bemis. (In the “Noise On The Side” special in AP 291, Dupree-Bemis explained the band name: “Before we actually met and we were talking over the phone and stuff, he kept asking me to be his girlfriend. But instead of saying 'girlfriend' he would use the term 'perma' for 'permanent.'”) Are you starting to feel queasy from all this sweet love talk? Well take a deep breath, because Perma are a million miles away from that horrible radio duet between Chad Kroeger and Avril Lavigne. The album’s first single was proof enough: The title track tells a Bonnie-and-Clyde type tale about a couple of criminals who fall in love. Anyone expecting Perma to sound identical to Say Anything or Eisley will definitely be surprised. The band are a combination of both Bemis’ and DuPree-Bemis strongest suits: their voices. Bemis’ voice—earnest, sometimes pleading but always resolved, works surprisingly well with DuPree-Bemis’ ethereal, lilting cadence. DuPree-Bemis sounds like she was born to sing love songs, while Bemis has been singing about dark topics like depression and crushing self-doubt since the beginning of Say Anything. That juxtaposition is why Two Of A Crime works. These aren’t saccharine love songs, but rather songs about love—and the insecurities that come with it.

“She Chose You” is Bemis’ song about how he won over DuPree-Bemis. After several years of marriage, he still sounds surprised he landed her, singing, “Out of every single guy in this crazy world/…So sing the anthem out, she’s your girl now.” “Let’s Start A Band” sees Bemis singing about that old self-doubt again (“In hope that she would notice me with my three chords and day job at the music store”), only this time DuPree-Bemis is there to reassure him (“I won’t lie/I haven’t let a day go by/Without what you wrote/And singing every single note”). Toward the end of the album, all the love can get a little heavy-handed (“The Bat And The Cave,” “No Dear”), but the album ends on a high note—or as high as a sparse piano ballad (“Torch Song”) and a mellow acoustic number (“Tangled Up”) can get. At its core, Two Of A Crime is an album DuPree-Bemis and Bemis wrote for themselves, and if other people enjoy it, that’s an added bonus. For outsiders looking in, the couple’s feelings for each other can be overwhelming at times, but when they sing, “When the tide goes down/You won’t let the current drag me out,” you don’t doubt the sincerity for a minute.