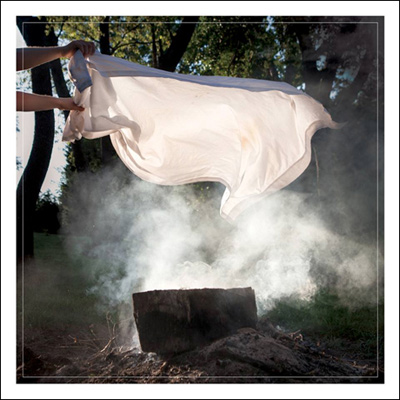 It's well-documented how Pianos Become The Teeth frontman Kyle Durfey has grappled with the loss of his father over the course of several albums. Even if the band weren't releasing records in the internet age where this information is freely disseminated among fans, it wouldn't take a crack reporter to figure out: A pre-recorded speech in “Cripples Can't Shiver,” from 2009's Old Pride (properly issued in 2010 via Topshelf), presents Durfey's mother at a church somberly explaining how her husband's multiple sclerosis has affected her family; then there's the opener on the band's followup, 2011's choked-up The Lack Long After, where Durfey longs for just a game of catch with his late father.

If Durfey's lyrics from album to album are anything to go by, it's consoling to interpret he's getting over this traumatic loss…slowly. But during all this time, his band's been accelerating their musical growth much more quickly, and Durfey's voice has kept pace. Though an early EP, Saltwater, and followup split (with the similarly raw Ezra Joyce) contained dirty sketches of rough-hewn emotional hardcore, the band quickly widened both their sound and vision by Old Pride, wedding cleaner guitars to Durfey's corrosive yelp amid a layout that pulled from Thursday's epically pained melodies and the expansive atmospheres of progressive screamo forebears like Envy and City Of Caterpillar. There were two more seriously progressive steps that followed, hinting at what was to come on Keep You: The Lack Long After closer “I'll Get By,” where Durfey wields a trembling, melodic enunciation to his yelped words; and “Hiding,” their contribution to a 2012 split single with Touché Amoré, where he's pretty much full-on singing for the first time.

In carefully tracing this path, Keep You shouldn't come as the most jolting surprise, but it still feels like a curveball. The singer still carries a slight tremor in his delivery, but now it's mostly confident and full-bodied, finding yearning peaks at unexpected points. Like their aforementioned peers Touché Amoré (who covered “Available” earlier this year) or Make Do And Mend (whose 2011 EP Part And Parcel stripped previous songs down to a chamber-rock vibe), his band cull a healthy dose of influence from the National—particularly their two most recent albums: Opener “Ripple Water Shine” has the same punchy, upbeat pacing as the National's “Bloodbuzz Ohio,” while “Repine” adds a crescendo to the moody, finger-picked vibe of something like “Fireproof.” But it carries far more of an effect on the band's sound than that shared influence does or did for their contemporaries, while they add subtle, tastefully accompanying bits of piano and strings at times. Their guitars also blend and glint rather than bite and growl; drummer David Haik keeps time dexterously instead of violently flailing away at spastic fills. Keep You is more “mature” and “adult,” sure, but it's also an incredibly bold, beautifully shimmering, deeply aching and immaculately crafted album that continues to find Durfey dramatically reconciling his loss and finding hints of closure and solace through a deliberately paced, emotionally exhausting record that captivates at every turn.

Like The Lack Long After's “I'll Be Damned,” the band start the album with an instance of immediacy. Though they may be compelled to build up to the moment more often than not, the abovementioned “Ripple Water Shine” is a softly peppy and surprisingly catchy, picturesque snapshot of Durfey struggling to find a moment of clarity on the lake, “still waiting for that drink at Otto's” as he was “Damned”'s catch. The rest of Keep You finds the band forging four- or five-minute-long processions where roomy guitars mournfully condole Durfey's carefully chosen, often slowly sung words, guiding the steady, unfolding march of standouts like “Repine” and the especially painful “Enamor Me,” pulling at heartstrings like a tug-of-war rope made of dental floss.

The early chorus of “Lesions” offers a rare major-key detour that sounds straight-up festive compared to the rest of Keep You, matched only in hopefulness by the Pedro The Lion-tinged “Late Lives.” These are refreshing seconds to try and catch one's breath and strain a smile along with Durfey, because he never really sounds resolute otherwise—ironically, though, the consonant moments when he resolves the band's musical keys are more or less life-affirming. Even in shorter explorations like the chamber musings of “Traces,” though, Pianos manage to set the mood to an immediate, downcast solemnity, every element reverberating with perfect tone (it's producer Will Yip's finest hour).

A mere glance of the track lengths makes it easy to recognize “Say Nothing” as the “epic closer,” which it is, but it avoids being too on the nose. Durfey builds to the strained yell he all but avoids on Keep You everywhere else, softly exploding far sooner than expected, then adding a few last quivering lines, seemingly conveying some fatherly wisdom regarding deep meaning in silence. The rest of the band softly close it out with a dimming twinkle, a '90s emo-style coda with extra gravitas.

Keep You certainly reaches for a hefty, developed sense of self beyond the grounding the band's held in contemporary punk, hardcore and emo some years now, but in doing so, it actually strikes the absolute perfect balance, enfolding the listener in honest and cathartic glory while enhancing its edges with just the right effects pedals and auxiliary instruments. Pianos Become The Teeth could logically embrace a more Baroque setup by their next album, and hell, Durfey may seem to achieve a consistent level of happiness by that time, too (at least on record). But right here, right now, amid the swirling symmetry of the thoroughly gripping Keep You, it's hard to imagine them sounding any better.