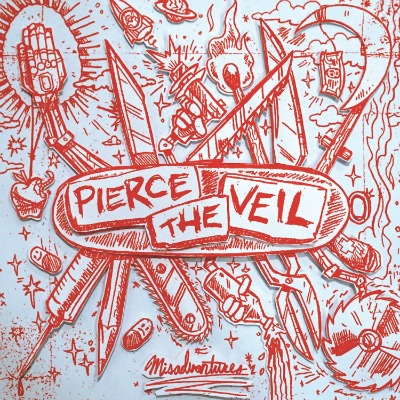 Pierce The Veil’s gold-selling single “King For A Day” was arguably this era’s quintessential song for the scene, the frontline assault for the monster album Collide With The Sky turned out to be. After what felt like an eternity (but in fact was way less time than Metallica, Depeche Mode, Radiohead and other giants take between records), Misadventures arrives with both the expectation and the trepidation of any important follow-up. The PTV faithful can breathe an excited gasp of relief, because “Dive In” could be the San Diego quartet’s best song ever, and it’s first on the album.

Every single track is a winner. Misadventures expertly redraws PTV’s own map, celebrating their impossible blend of ambitious, creative obsessions and the electric crackle of raw intensity. On album four, Pierce The Veil somehow sound as epically lavish and theatrical as Muse or Queen—but also punk as fuck. Vic Fuentes famously wrote and rewrote the vocals all over Misadventures and the singer/guitarist’s painstaking determination to squeeze absolute meaning and emotion from every syllable paid off. “Texas Is Forever” and “The Divine Zero” are as raucous as anyone could want, while “Floral & Fading” extends the band’s already impressive reach into the pop-rock stratosphere without sacrificing an ounce of intelligent flavor.

Mike Fuentes brings his live intensity to the album’s pulsating grooves, laying a foundation with fluid and dynamic bassist Jaime Preciado for the elder Fuentes and guitarist Tony Perry to weave through, over, under and alongside, with agile shred and tasteful flourishes. There’s nothing dumbed-down about even the most unapologetically syrupy of moments on Misadventures, with the undercurrent of progressive aggression never far from the surface. Misadventures is the stuff of time capsules, marvelously embodying everything important this musical subculture offers while enthusiastically transcending its limitations with authentic charms.