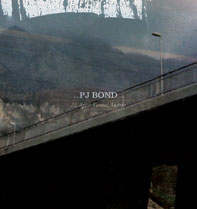 22 April: Vienna, Austriais basic—just Bond and his acoustic guitar. No drumbeat, multiple vocal tracks or backing instrumentals; just bare-bones songs held together by Bond’s undeniable charm. Somewhere between the frankness of John Lennon and the positive vibes of Piebald lies “Grow Your Smile Wide,” an extremely catchy manifesto (“Grow a garden in your backyard for the neighbors and the bums”). Bond’s cover of NOFX’s “Lori Myers” isn’t too shabby either, and proves the original is an overlooked work of art—exactly what a good cover should do.

22 April: Vienna, Austria Is a tricky release. PJ Bond is an excellent songwriter, full of heart, hooks and damn good poetry (example: “You’re not here making warm spots in my bed”). But most of these songs were recorded with a kick-ass backing band on his sophomore release You Didn’t Know I Was Alphabetical, making the EP a tough sell in comparison. 22 April: Vienna, Austria is perfect for the diehards, but newbies should give his last full-length a go instead.