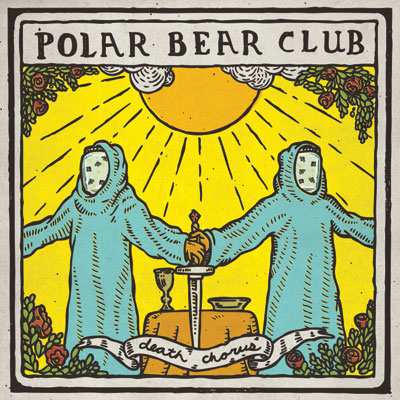 Polar Bear Club have had one bender of an album cycle. In the two-year space between records, they’ve redefined their lineup (two founding members remain, the core songwriting duo of singer Jimmy Stadt and guitarist Chris Browne), opened for their heroes in Bad Religion, signed up for marriage (congrats, Jimmy!) and spread themselves across the country like hot butter.

A transitional period this deep into a career could end less resilient bands, but only seemed to give PBC a fair-sized flesh wound in the form of a few forgettable songs. They recorded with new blood as they tend to, this time selecting so-hot-right-now producer Will Yip (Balance And Composure, Title Fight). He translates the band’s massive live sound like tracing paper, with an attention to detail highlighting Browne’s penchant for Midwestern twang. (What better song to display this than “Twang (Blister To Burn)”?)

Some squirmed at the lead single and album opener “Blood Balloon” for not riding on the dirt road of Stadt’s gritty throat. Those worried about the prevalence of Stadt’s “other” voice should know Death Chorus sounds like a sequel to 2009’s pop-obsessed Chasing Hamburg, and the vocals have followed suit. Stadt still delivers his finest rooftop howls to date in the chorus of “For Show,” carrying on and losing himself in the ends of syllables. On the flipside, “So I Buy” is his catchiest Mr. Clean chorus yet.

Keeping true to PBC precedent (sans the previous LP), there’s a ballad on cue at the halfway mark. “Siouxsie Jeanne” is an ode to Stadt’s theatrical background that comes off way too kitschy. He takes the spotlight, slinging fiction over a single scatterbrained guitar ushered into the background. He’s far more captivating when leaving less to the imagination, bluntly asking, “Why live when you can die?” a song later in “WLWYCD.” During “Chicago Spring,” it all begins to tie together. You can connect the dots to every era of PBC in its climax, a chunky breakdown bearing strength that’s a throwback to their origins in its spacial underlay of delay.

The punk-rock finale is a sacred place where bands can lay it all on the table while getting a little emotional, knowing it could be the last thing we ever hear from them. Polar Bear Club have left us with more everlasting endings, but the Jimmy-isms (“salt in a snowglobe,” anyone?) are ripe in “Upstate Mosquito,” with Stadt likening himself to a pesky insect as he pokes fun at people removing tattoos of “no regrets.” It’s a new beginning for PBC—one that hopefully isn’t their own death chorus.