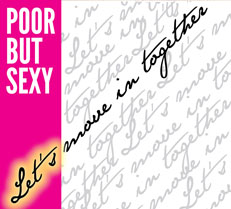 Let’s Move In Together

When approaching an album that features the guitarist of seminal Washington, D.C., math-noise-pop geniuses the Dismemberment Plan (as well as two dudes from the underrated Travis Morrison Hellfighters), as a fan you would be wise not to expect a retread of those projects. But also as a fan, you would expect the result of so much talent to, at the very least, be a rewarding listen. Not so with Poor But Sexy’s debut album, Let’s Move In Together.

Opening track “Big Chief” begins with the terrible lyric “From the first time I came here/You know I felt kinda lame here.” Let’s Move In Together stays the course of mixing cringe-worthy lyrics with all the soul of an office party. It's a real shame because if you can ignore the lyrics and all the “get-it-guys?-we're-playing-yacht-rock-get-it-guys?-ha-ha” posturing, the album sounds good. The band are playing super-tight funk and R&B, and when they drift from what sounds like hitting the “demo” button on a keyboard, the arrangements get interesting.

There are even a handful of promising songs in the middle of the record. The funky “Cut That Hair” sounds like a 30th-century Vampire Weekend, and the relatively minimal arrangement on “Dance Alone” allows the short keyboard/guitar riffs and Motown-inspired background vocals to resonate. By the end of Let’s Move In Together, the band even manage to finally forge a convincing Funkadelic homage. Unfortunately, this happens in a track called “Dong Pills.”

And that’s the trouble with Let’s Move In Together. The band’s press release claims that their sound is polarizing, but the idea of mixing R. Kelly and Steely Dan with outer space isn’t fundamentally bad. However, it feels more like Poor But Sexy are laughing at the artists that inspired them, and it makes us wonder who would actually listen to this album on purpose. Ironic dudes working media jobs in Brooklyn? That sucks.