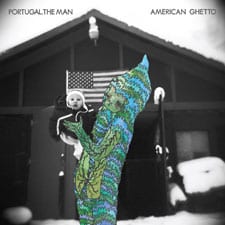 Portugal. The Man have truly become prolific. The Portland, Oregon-by-way-of-Wasilla, Alaska, band have managed to release an album each year since their 2006 debut, Waiter: "You Vultures!"–not exactly an easy task since the group also tour relentlessly. Sure, you can toss new material out to the public any time you want (paging Ryan Adams) but it's harder to guarantee its quality. Yet Portugal. The Man, for the most part, have managed to maintain a level of quality equal to their quantity.

American Ghetto, the band's fifth studio album, sounds almost more like a companion piece to last year's The Satanic Satanist than a new album. Its songs are similarly strange and meandering, with hidden pop hooks that occasionally slide out through the layers of guitar and harmonizing vocals. It's introspective and detailed, with moments of self-indulgence, meaning that like much of Portugal. The Man's music, it requires attention and numerous listens. Tracks like rollicking "The Pushers Party," the slower, pensive "Some Men" and standout "When The War Ends" highlight the band's growing ability to achieve the deep, burgeoning sounds of their live shows on recording. They're still not quite there–as anyone who has ever seen them can attest to–but with each new album, Portugal. The Man gets closer to recording songs that stand up for themselves.

There's no moment of breath between 2009's The Satanic Satanist and this disc, which is really its lone flaw. American Ghetto, sonically, is The Satanic Satanist, Part Two. That's not a bad thing, necessarily, but the space created between records is what makes each new release seem fresh and exciting. With only about nine months between albums, Portugal. The Man hasn't left much room for air.