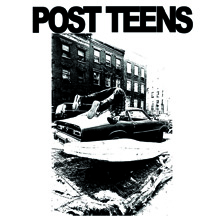 There’s a no-nonsense honesty to Post Teens’ resurrected old-school punk sound that’s quite beautiful. Songs blaze by in 60 to 90 seconds driven by raw, chunky guitars with a rough, unvarnished veneer and surprisingly durable hooks. It’s a sound that harks back to early American hardcore, when you could still hear the influence of the ’70s British punk explosion. Though similar to Los Angeles bands like the Germs or the Dils, the Gainesville, Florida, quartet (who include Assholeparade guitarist Tony Marquez and Torche drummer Rick Smith) have the distinct Midwestern flavor of early regional rust-belt punk icons like Zero Boys, the Pagans and the Meatmen.

Though the six tracks collectively don’t last as long as your average Phish guitar jam, they make a better impression and stick with you longer. Opener “Bleached Heads” fashions a flame-retardant curtain of guitar around an irresistible little riff, a skill the band showcase throughout. The 53-second “When I’m Wasted” crests like a wave as it evokes the spirit of Black Flag’s “Wasted.” There’s a cool, menacing air to “Crust Lust” that recalls early Naked Raygun, while the furious “We Don’t Like You” epitomizes the album’s ill-humored attitude, as Tony Marquez sings, “Nothing but shit comes out your throat/We’ll cut you down and make you choke.” The steely, D.C.-tinged “Got A Problem” also cast them as haters. Then again, what’s punk without a little vituperative bite?

The highlight track is their newest and only previously unreleased song, “Fucked Up Perception.” (The remaining five tracks were pulled from two recent, cassette-only releases.) It’s Post Teens’ most epic track—clocking in at a whopping 105 seconds—and their most sonically vigorous, too. The fuzzed-out guitars spill over like an infinity pool with brief splashes of feedback, building to a guitar outro that sounds like a riff from Hüsker Dü’s Zen Arcade. That it’s the most recent composition is quite positive, and with the resurgent interest in hardcore of late, Post Teens seem well positioned to turn some heads.