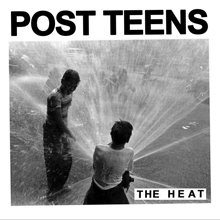 Five songs in a shade more than six minutes. Now that we have that out of the way, fans of old-school punk/hardcore like Circle Jerks, the Adolescents and Gang Green will be cheers-ing exuberantly to the new EP by Florida’s Post Teens (featuring guys from Assholeparade, Torche and other Florida hardcore bands). On The Heat, Post Teens continue the fury they unleashed on their self-titled EP, which was also of the short, fast and loud variety. Out of this new handful of tunes, “Fear God” is just as good as anything Keith Morris’ OFF! have done—and that band feature some of the originators of this snotty kind of punk. The vocals are spat, guitars sound like precision distortion, the bass is buried beneath that wall of sound and the drummer might as well be hitting garbage cans (although, it’s a big collection of them, by the sounds of it). All in all, there aren’t many better ways to spend six minutes. Also, what other punk bands have the balls to write a song about open relationships and call it “Polyamory”? Fast, blazing, ripped-to-the-gills punk rock from guys who aren’t just banging away blindly. This batch of three-chord rippers are like freshly sharpened buzzsaws.