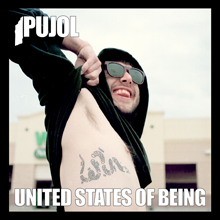 United States Of Being

Nashville’s Daniel Pujol is a kindred spirit of the Hold Steady’s Craig Finn. Both use punk-informed rock as a backdrop for coming-of-age lyrics, and the enjoyment of both hinges on one’s opinion of their gravelly, sometimes monotone voices. On the former MEEMAW band member and current all-caps enthusiast’s debut full length UNITED STATES OF BEING, PUJOL sounds alternately like a whiskey-drenched bluesman and a downshifted Billy Corgan. Those who find this delivery either enjoyable or inoffensive will dig moments like the sunny “PROVIDENCE” and the Springsteenian “REVERSE VAMPIRE.” PUJOL works best in bite-sized portions, hence generating buzz through EPs and singles. BEING lacks enough urgency to sustain nearly 38 full-throttle minutes and becomes an analogy for the unvarying capitalization on its record sleeve: Without any lowercase moments, everything blurs together.