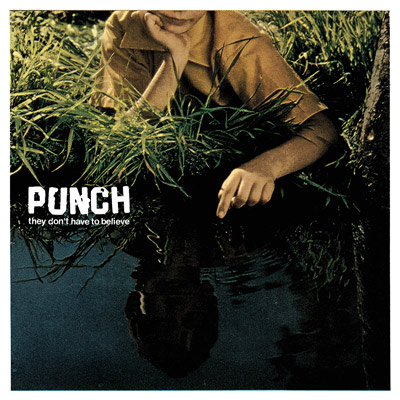 They Don’t Have To Believe

They Don't Have To Believe is the best tightly wound ball of rage and righteous indignation Bay Area hardcore act Punch have produced yet, following two searingly intense full-lengths and a 2011 EP that raised the stakes on the band's catch-all approach to the style. After meshing together youth crew, powerviolence and ’80s fastcore to surprisingly cohesive and thrilling results, Believe sounds more singular, capturing the straightforward, unhinged aggression of American Nightmare ca. Background Music without any of the major-key shades that band occasionally let slip.

Punch are all the better for it, though, unleashing a rabid 19 minutes against feminist oppression. Highlight opener “Worth More Than Your Opinion” rails against street harassment, and “Personal Space” could be an excerpt from Consent For Dummies. “Not Sorry” simply defends showing teary-eyed human emotion. Stay cold? Not here. A pulverizing backing of blast beats, sharply intense left turns and moments more than likely to set off the legion hall dancefloors in fits of two-stepping and crowd clearing only intensifies the lyrical unraveling of personal fears and strains of persevering through self-doubt.

Sure, They Don't Have To Believe could be a lost relic from the early-to-mid-2000s, and feels a shade unoriginal at rare moments, but its sheer restlessness and able-bodied performance makes up for it. Basically, it’d be a standout hardcore record of any year it came out, 2014 included.

“Worth More Than Your Opinion”