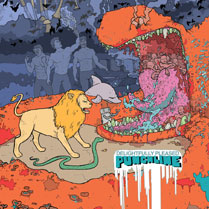 Pittsburgh, Pennsylvania, quartet Punchline are no joke. Their entire fifth album courses on a river of crisp pop-punk, mildly amusing lyrics, and pulsing rhythms as persuasive as they are effortlessly punchy. In no time at all, your head’s bobbing like it’s at the end of a bungee cord. While it’s perhaps not as strong top-to-bottom as 2008’s Just Say Yes, at worst it’s a hair’s breadth behind.

Singer/guitarist Steve Soboslai opens the album with the assurance, “You won’t find songs of hopelessness on this record/You find songs that leave you at a loss/Just press play and feel your problems melt away.” It’s a bold prognostication, but one that proves quite accurate. Lingering concerns don’t stand a chance in the face of these plucky tunes.

The album’s biggest highlights hit back-to-back with “21 Forever” and “Greatest. Party. Ever.” The former offers an infectious hook and an indomitable chorus backed by ooh-ing vocals amid tasty ringing guitars. Tightly constructed with a cool change-of-pace break and some great lines (example: “Harder than titanium but worth more than those diamond dreams”), “21 Forever” is the type of song that barely ages no matter how many times you hear it.

The scene set by “Greatest. Party. Ever.” elicits its share of laughs, gliding over a taut guitar line. It reiterates the spirit of the opening track, as Sobolslai suggests, “We can’t avoid that the future is here, so let’s stay up late and celebrate.” However, it’s descriptions like “I’ve been cleaning, and dusting and cooking all day/I’ve got a fridge full of Zima and a vegetable tray/The Scrabble boards are shining like sequins in the sea/The Wi-Fi network is slammin’, Forrest Gump’s on TV,” that make it nigh irresistible.

Other worthwhile tracks include the bouncy power-pop of “Keystoned” (whose Pennsylvania travelogue ought to be picked up by the tourism bureau), the lighthearted pop ballad “Whatever I Want, Whenever I Want,” whose declaration of independence belongs on a college mix CD somewhere, and the supple “Coyotes In B Major,” whose vivid dream-logic lyrics hint at a surprise hook-up as the song winds through several well-wrought musical passages.

Indeed, “Coyotes” neatly encapsulates the album’s charms. Despite being delivered with an almost uniformly upbeat pace, every track has their own keenly constructed personality. Punchline know their way around a pop song well enough to get jobs as tour guides, and the lyrics are never throwaways nor too clever for their own good. It’s not earth-shattering by any stretch, but it’s put together with such obvious care and enthusiasm that its overtures are difficult to resist or regret the morning after.