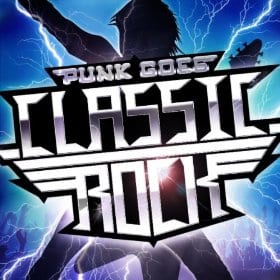 Think your parents' music is lame? Think again: Judging by Punk Goes Classic Rock, Journey, Queen and Tom Petty are the dominant influences on your favorite Warped Tour bands. The ninth installment of Fearless Records' Punk Goes… series is an impressive, fun homage to the dinosaurs coming to an outdoor amphitheater near you this summer.

On the lighter side, I See Stars' "Your Love" and We The Kings' "Caught Up In You"–recorded by the Outfield and .38 Special, respectively–are big, joyous pop-rock confections. (The latter song is a kissing cousin of latter-day Motion City Soundtrack, in fact.) The Almost's version of Tom Petty's "Free Fallin'" is a grungier take on the original, although it's no less heartfelt, and Every Avenue's version of Eddie Money's "Take Me Home Tonight" needs to soundtrack a movie prom scene, stat.

Unlike other Punk Goes… collections (i.e., most of Punk Goes 90's and Punk Goes Crunk) there's nothing truly embarrassing on Classic Rock, mainly because most bands don't move out of their stylistic comfort zone. The less-successful songs–Envy On The Coast tackling Bob Dylan's "All Along the Watchtower" in plugged-in, Jimi Hendrix style and Hit The Lights struggling through Boston's "More Than A Feeling"–suffer mainly because of weak, unsteady performances.

But consider this: Perhaps Punk Goes Classic Rock succeeds because in the end, the genre's hallmarks–over-the-top riffs, gigantic drums and dramatic, anguished vocals–aren't that different from those found in the modern emo or punk scenes. Although kids in the '70s and '80s rebelled against these bloated acts, today's musicians have no such biases. So in a sense, your music isn'tthat much different from what your parents might like. Scary thought.