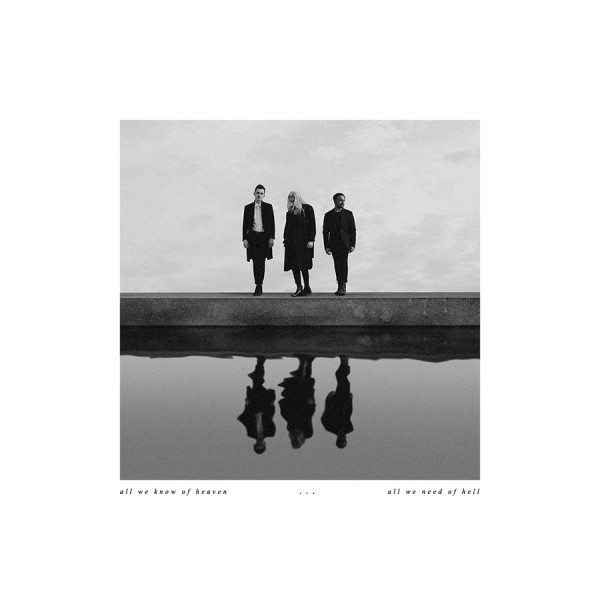 All We Know Of Heaven, All We Need Of Hell

In a past life, PVRIS were a metalcore band performing under the moniker Operation Guillotine. It’s nearly impossible to imagine that five years since their inception, they’d be two stellar full-length records into a promising electro-pop rock career, made fruitful by its relationship with Rise Records and wholly loyal fanbase. They possess a rare quality, an undeniable, extramusical element that makes PVRIS not a band to listen to casually. If you like them, you love them: You are all in. Their sophomore release, All We Know Of Heaven, All We Need Of Hell, proves the fascination is warranted.

When PVRIS first appeared in 2014 with their debut, White Noise, they were immediately noteworthy for their hybridity—genre-blind, they wrote massive-sounding alt-rock songs with real pop structure. Guitars and synths were given the same level of importance, foundational to frontwoman Lynn Gunn’s performance. She moved from a whisper-sing to a guttural roar with impeccable clarity. She had—and still has—what success in this scene requires: an idiosyncratic voice that feels familiar, made different and memorable enough to illicit a real sense of empathy. In that regard, All We Know is White Noise, but wiser.

The opener “Heaven” uses a looped synth line that repeats and reverberates as Gunn stretches her voice over the chorus “You took my heaven away,” a lethal combination that feels like a recorded memory.

From there, “Half” launches with anthemic specificity—it’s the closest thing to a sonic respite, but PVRIS rarely slow down. To call it a heartbreak record would be limiting, but there are certain mature themes and ideas being presented that feel deeply personal—it’s easy to become attached. “Walk Alone” and “Separate” unravel: f PVRIS are trying to tell us something, it’s that there’s real power in making your fears transparent.

On “Same Soul,” Gunn does her best early Hayley Williams delivery—a self-assured softness that comes from the strength of someone wholly unsure what tomorrow brings, but more than willing to dive into the deep end of the journey. The repetitive chorus line “Just somebody that I used to love” recalls the inescapable 2011 radio hit “Somebody That I Used To Know” by Gotye while giving the sentiment real weight: You could make a friend a stranger, or you could say goodbye to a lover forever. PVRIS, in this way, are all in, too.

Sophomore releases are usually written about as career-defining: The world knows your name now; what are you going to do next? For PVRIS, it’s an evolution—their music is tighter, sharper and aiming for the jugular in its first shot. In the simplest terms, the band crafted a record that fills the bigger venues they are sure to be playing now and in the future. Gunn and crew have the potential to be stars of their world, a band that truly, deeply connect with underdog identities. There’s something healing about it.

Once you listen to PVRIS' new album, let us know how you feel about it in the comments.