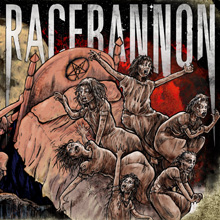 Racebannon are no strangers to the concept album. Most notably, their 2002 punk opera Satan’s Kickin’ Yr Dick In showed that Indiana’s noisiest could also be its artiest—and evilest. The title of Racebannon’s new full-length, Six Sik Sisters, is a clue that they haven’t lost their devilish tickle. Instead of another opera, though, the album hangs together far more loosely; following a sketchy narrative that has something to do with witches (or something), bestial frontman Mike Anderson babbles, barks and bullies his group through minefields of mutant rhythms and clouds of insectoid feedback. Recently, guitarist James Bauman claims to have been reconnecting with this childhood passion—’80s thrash—but his thick, twisted riffage on “Thee Brother” and “Thee Challenge” takes that brute force and sets it loose on itself, with bloody results. Considering the scope of Racebannon’s previous output—and barring experimental cuts like the eerie, ambient “Thee End”—Six Sik Sisters is actually one of the least ambitious albums they’ve ever made. But its lockjaw ferocity and pinpoint chaos make for an equally potent blast of diabolical ass kicking.