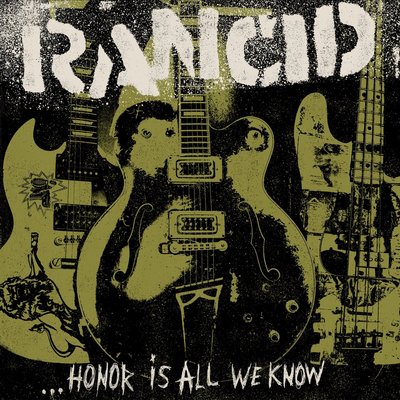 …Honor Is All We Know

Before we go any further: Yes, …Honor Is All We Know, the first Rancid album in nearly six years, absolutely rules. But did any of you Rancid-heads out there ever have any doubt? Now let us tell you why it rules…

The one big expectation with Berkeley’s favorite (or least most legit) punk-rock sons is that everything Rancid do needs to measure up to not only their classic first two albums, but also their previous band, the legendary Operation Ivy. …Honor Is All We Know succeeds at both of those tasks by quickly returning to vocalist/guitarist Tim Armstrong and bassist/vocalist Matt Freeman’s ska-punk roots (see the absolutely skankable “Evil’s My Friend”) while staying true to the street-punk leanings of guitarist/vocalist Lars Frederiksen (album closer “Gravedigger” is a pure scorcher). Then there are the songs where they manage to blend both styles perfectly (see the jaw-dropping and seamless “In The Streets”), not to mention the tracks where they add even more influences to the mix. As you can see, there’s a lot to balance here.

Featuring 14 songs that fly by in what feels like no time at all (32:47, to be exact), Rancid’s eighth album doesn’t sound forced, which for a traditional punk band is often very hard to pull off. A song like “Face Up,” with its handclaps, shout-alongs and deep, swinging beat could only be written by a band who don't give one fuck, which is usually where the best punk rock comes from. This album is crammed with brave choices; the rockabilly gunfight swagger in “Already Dead” is like a Clint Eastwood movie with a Mohawk, “Everybody’s Sufferin’” is pure reggae-punk bliss and the title track, previously heard on one of Armstrong’s Tim Timebomb mixtapes from 2013, not only blazes like something off of Rancid’s self-titled debut from 1993, they actually pronounce “honor” with a hard “H”! How badass is that?

Rancid have gotten a lot of shit over the years for being cartoon-like punk rockers with goofy haircuts and even goofier accents, people crying “sellout” whenever they dare to make any kind of business move, but the reality is this band have consistently delivered some of the best, most honest punk rock of the past two decades. …Honor Is All We Know is a very welcome addition to Rancid’s nearly impeccable legacy.