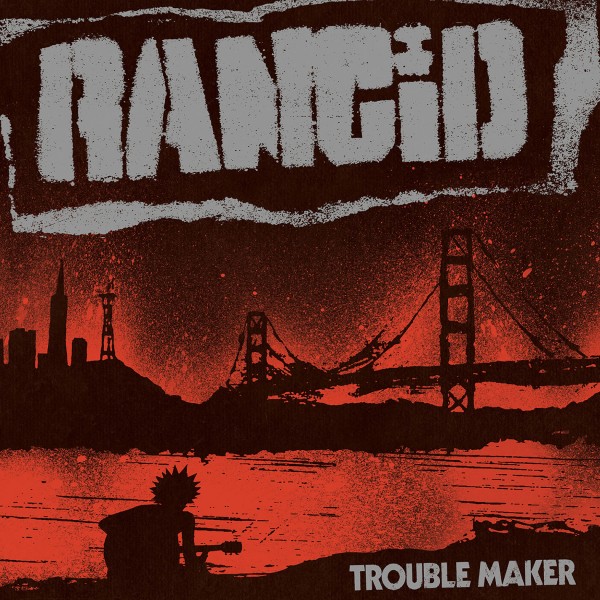 Rancid? Oh, them. The grumpy punk bastards who can’t be bothered to go on tour to support a record, do press for it or get in step with whatever trends are happening in contemporary music. Whatever, man. Trouble Maker, their ninth album, has 17 songs on it. How stupid is that? Any industry worker drone will tell you that you only get paid for 10, so why bother? Half of the damn things clock in at less than two minutes, while the longest track (“Telegraph Avenue” which comes in at 3:19) is done in less time than it takes Radiohead to tune their guitars properly for half a song. At a time when punk culture has delved into laughable bougie gestures (read: cruises and Vegas bowling weekends), Rancid’s whole enterprise is as enriching as a Renaissance faire, only with more Liberty spikes, low-grade back patches, ugly plaid pants and a fuck-ton of regrettable tats and piercings. Doc Martens should start making clown shoes.

But when you actually listen to Trouble Maker, you realize Rancid have never aimed for the lowest common denominator or curried favor to a generation who listen to music on their fuk’n phones. Tim Armstrong, Lars Frederiksen, Matt Freeman and Branden Steineckert have always been true to themselves, and whatever your favorite metaphor is that invokes unshakable, tireless dedication (the fire that still burns, blood being thicker than water, Knuckle Puck’s endless quest for authenticity), feel free to use it to evoke the spirit of Trouble Maker. Because nothing really embodies the concepts of punk community like a gang vocal shoring up Tim Armstrong’s sense of purpose (“I Kept A Promise,” “Where I’m Going,” the poignant “Say Goodbye To Our Heroes”). There are nosebleed pit starters (“An Intimate Close Up Of A Street Punk Troublemaker,” “Make It Out Alive,” “All American Neighborhood”), as well as old-school vibes (“Molly Make Up Your Mind”) that sou… wait… feel like lost collector’s gems released in 1979 but unfairly got overlooked in favor of Clash and Chelsea seven-inches. And if Armstrong and Frederiksen were secretly writing for the Rolling Stones (something along the lines of “Bovver Rock ’N’ Roll”), maybe history would look at Jagger and Richards’ later legacy a little kinder. For whatever reason, it doesn’t seem like any other punk bands are making records like Rancid. Not because they won’t—because they can’t.

Straight up, Trouble Maker proves that Rancid have a warehouse full of fucks and they’re not giving a damn one of them to you, this reviewer, AP or anyone else who wants to quantify, debate or dismiss their volatile relevance. Rancid are a time machine of their own design, one that’s as vicious and uncontrollable as a dog-fighting operation or as cool as a chromed-out straight razor. No, there’s nothing here that sounds like “Ruby Soho” or “Roots Radical,” fucko, so get over it. Because before their band became a business, a fixture in your cool parents’ record rack or a footnote in SNL history, these guys knew immediately that punk was not just a genre or a “phase,” but a way of life. They care not a whit about market share, EDM remixers or having annoying YouTube stars and/or rappers guest on their sessions, choosing instead to light up psychic votive candles for Joe Strummer, Desmond Dekker and Lemmy in order to capture the very same spirit those artists conjured all those decades ago. Long may Rancid live to tell every last one of us to piss off, right before getting us to link arms and fuk’n dance. Cover me, I’m going in the pit… Jason Pettigrew