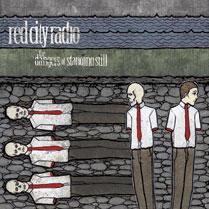 The Dangers Of Standing Still

Hurtling out of Oklahoma City in whirlwind of dust and fire, Red City Radio have been making quite a stir since the release of their 2009 EP, To The Sons And Daughters Of Woody Guthrie. Playing socially aware, emotionally driven rock ’n’ roll, the band have followed through on the promise of that EP to produce an incredibly impressive and ambitious debut album. Dominated by raucous, gruff-voiced sing-alongs that are as catchy as they are brash and as anthemic as they are rebellious, this album is the product of four songwriters sharing an undeterred sense of purpose and being. While that four-way dynamic does run risk of diffusing and diluting the power of their songs, Red City Radio have succeeded in channeling their disparate parts into something singular and unified.

From the clattering warning bells of “An Introduction Of Sorts”—which begins with a chugging, slow-motion gang-vocal chant before transforming into a fraught and frenetic brash-punk outburst—to the pummeling rhythms of closing song “Nathaniel Martinez,” The Dangers Of Standing Still brims with an irrepressible spirit and passion for the duration of its near-40 minutes. Listen, for example, as they sing, in unison and with voices that Hot Water Music’s Chuck Ragan would be proud of, “Together we can burn this fucking city to the ground” on “Two For Flinching” and try not to join in. Even on the first listen, it’s pretty difficult.

That’s precisely where the poignancy and power of this album lies—somehow, the band have managed to turn yearning nostalgia into a bombastic outpouring of restless, hopeful exuberance. “Spinning In Circles Is A Gateway Drug” is a metaphysical and metaphorical coming of age tale that destroys the sadness of the past as it speeds away from it, while “Drinking Ourselves Into The Future” raises a glass to making the most of now and embracing the moment before, as so often happen, it slips away into the bottle. Elsewhere, “I'm Well, You're Poison” tumbles with history, turning the political past into the personal present with an urgent and impassioned burst of self-salvation, and the open-road romanticism of “This Day Has Seen Better Bars” drives through the dark American night and its never-ending highways with a desperate desire to escape to someplace else, wherever that might be.

Essentially, this is intelligent, emotive punk rock at its finest that’s not afraid to admit where it’s come from. But while there are shades of others—from Jack Kerouac to William S. Burroughs (whose Dead City Radio album gave this band their name), Bruce Springsteen to Hot Water Music, Jawbreaker to the Gaslight Anthem—the late night cities, the smoke-filled rooms, the dry lungs, the drowning livers and open highways of this record are those of Red City Radio alone. This album is their own journey through their own world, and it’s very much worth joining them.

“This Day Has Seen Better Bars”