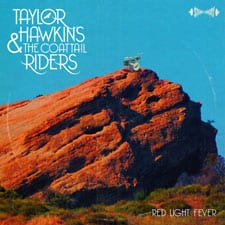 In one of the funniest sketches from the short-lived Comedy Central programStella, Michael Showalter throws a dog out of an apartment window. His eyes water immediately as he dramatically apologizes, "I just threw your dog out of the window, and that was wrong of me." The joke is, of course, that being aware of your faults does not make them instantaneously forgivable. Taylor Hawkins, best known as the drummer for the Foo Fighters, has probably not watched this scene. The tongue-in-cheek moniker of his solo project, Taylor Hawkins And The Coattail Riders, is a self-depricating nod to cashing in on the success of his main gig. Unfortunately, Red Light Fever fails to transcend the self-inflicted irony–The Coattail Riders' schtick becomes Hawkins apologizing without really being sorry. Taylor utilizes similar personnel as the Foos (Surprise! Dave Grohl sings and plays guitar) and draws from the same pool of '70s rock influences. The elements coalesce into little more than a bar-rock record whose flimsy hooks collapse under the weight of paint-by-numbers power-chord riffage and indulgent solos. The Coattail Riders have an obvious sense of humor, but Red Light Fever raises questions of who the joke is truly on.