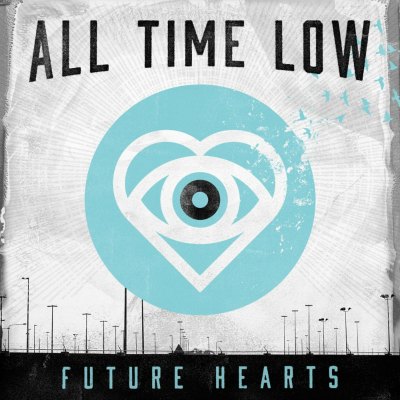 The announcement that producer John Feldmann would be helming All Time Low’s sixth album was met with intense fan consternation. Would Future Hearts be a 5-Seconds-Of-Summer-by-way-of-Baltimore record? As it turns out, all that hand wringing was for naught; there’s nothing on Future Hearts that even closely resembles 5SOS. If anything, the songs ATL frontman Alex Gaskarth helped pen for their debut sound more like All Time Low than the other way around.

Instead, this set features tighter songwriting, more complex and layered arrangements and some of the most fully realized songs in the ATL canon. There’s really no better example than “Tidal Waves,” the album’s centerpiece and the best ballad the band have ever written (sorry, “Remembering Sunday”). With Blink-182’s Mark Hoppus lending his vocal talents, the track swells with synths, strings and an a previously unheard poignancy for the group. You get the sense Gaskarth has been trying to write this sort of song for years, and all his woodshedding has finally paid off.

In their cover story in AP 319, All Time Low vowed they’d never abandon their pop-punk roots, but still, the songs on Future Hearts have far more shades of grey in terms of genre expansion. Take a song like “Cinderblock Garden.” Its chorus, undoubtably a throwback to So Wrong, It’s Right, still showcases clear evidence of the band’s marked maturation since then.

Likewise, much of Future Hearts serves as a small step down a new path: the new-wave arena rock of “Kids In The Dark”; the snarled, speedy Green Day-esque “Kicking & Screaming”; the groove-heavy, ‘90s alt-rock-leaning “Bail Me Out.” Then, in complete contrast, the closing “Old Scars/Future Hearts” comes complete with a thrashy outro that’s the heaviest the band have ever sounded.

In a perfect world, this is the album All Time Low would have released in place of Dirty Work, their sole (and much maligned) major-label offering. There’s no obvious attempt at chasing a single or a brass ring, just improvements on a sound the group have been trading in for more than a decade—and upgrades that might very well have resulted in their best album to date.