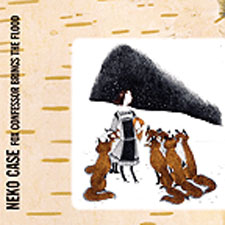 It’s tempting to think this will be the album that finally breaks sometimes-New Pornographer Neko Case into the middle-aged pop market, a place so dull that Norah Jones is its version of a rock star. But even if that happened, we wouldn’t accuse Case–who, over four previous solo discs, has suspended gospel, country and old-time-folk safety nets beneath her theatrical showstopper of a voice–of pulling a Liz Phair. Fox Confessor Brings The Flood doesn’t stray far from Case’s last album of original material, 2002’s critically acclaimed Blacklisted, but it does improve on it significantly with an astonishing collection of melodious noir-rock, modern gospel and Fleetwood Mac-like pop that should leave Case’s peers eating a cloud of Nashville dust.