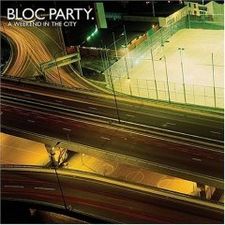 A Weekend In The City

Bloc Party almost sounded too ambitious on their 2005 debut, Silent Alarm, as if they couldn’t decide whether to be the synthpop version of Sonic Youth, Morrissey’s lackeys or Pixies-inspired noise-poppers. This indecision resulted in an album that was always interesting, but often felt overcrowded with ideas. The band sound more focused on A Weekend In The City but now face the opposite problem: They play things way too safe on their sophomore effort, which makes for a rather boring listening experience. City starts out promising, with the spiky electro-Nintendo workouts “Hunting For Witches” and “The Prayer,” and the Placebo-meets-Doves tune “Waiting For The 7.18.” But the second half of the album falls apart, as the few memorable moments-like the subtle chorus melody on the U2-epic “Kreuzberg”-are lost amidst bloated, sluggish ballads that never really go anywhere or do anything interesting or original. Blame the sophomore slump, the pressure of internet backlash, or something else-but it’s a shame that Bloc Party’s tentative City leaves so little of an impression.