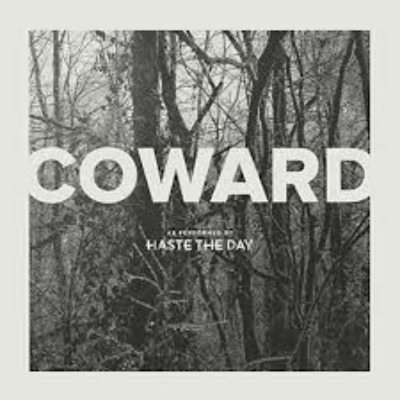 Much like their former labelmates Underoath and Norma Jean, Christian metalcore merchants Haste The Day have gone through their fair share of lineup changes. After calling it a day in 2011, only bassist Mike Murphy remained as the sole original member.

On Coward, HTD return with the team found on their 2010 metalcore monstrosity, Attack Of The Wolf King. Throughout the effort, they are joined by some familiar faces, including original vocalist Jimmy Ryan. Despite oozing with the utmost potential, this is where the album falls slightly short of its sky-high expectations. Coward tends to lack an overall sense of cohesion, creating a slight disconnect for the listener, yet doesn’t hold the band back from creating arguably some of their most profound material to date, in bouts of progressive, titan metalcore. The band power through destructive yet delicate riffage (“World”), nostalgia-filled sing-scream patterns (“Lost”) and newfound passive-aggressiveness (“Shadow”) to formulate a bombastic arrangement of skull-caving metal madness. But while old school fans will fall in love at first riff with the LP's Ryan-fronted offerings, those who came along further down the line may find themselves slapping the skip button. The punk-induced “Take” falls short from monotonous repetition, while “Accept” resides firmly in When Everything Falls B-side territory.

Despite falling short when revisiting their roots, Haste The Day have still managed to fashion a considerably successful career-spanning record. Coward may cause some confusion among newcomers, but longtime fans will soak up every second.