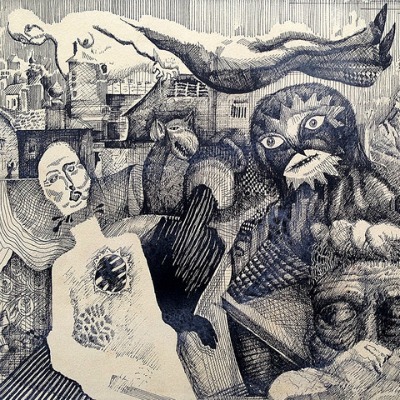 Everything’s come around full circle on Pale Horses, the sixth full-length from Philly’s beloved mewithoutYou.  Since their folk fascinations on 2009’s It’s All Crazy! It’s All False! It’s All A Dream! It’s Alright, the band have built their way back towards their heavier origins.  That’s not to say Pale Horses strictly returns to those post-hardcore / groove origins; rather, they’ve blended Ten Stories’ learnings with Brother, Sister’s intensity to create a dense album (perfectly produced by Will Yip) that’ll please fans of every mwY iteration.  Whereas the band’s previous MO generated energy through breakneck melodies, here mwY get heavy by slowly building tension, allowing vocalist Aaron Weiss to burst in big moments (“Red Cow”). Those quiet-to-crunchy transitions make for some of Pale Horses’ best moments, especially on the closing “Rainbow Signs.” Combine those tricks with mewithoutYou’s classically idiosyncratic riffing (“Watermelon Ascot,” “Blue Hen”) and you have a well-rounded album that might be mewithoutYou’s best.