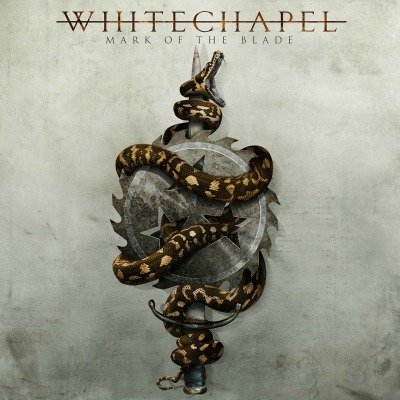 Mark Of The Blade

First and foremost: Yes, Phil Bozeman does deliver clean vocals on this record. But old school Whitechapel fans can hold off having any impending panic attacks because the revered death-metal growler only sings on one song, “Bring Me Home.” Though it’s strangely reminiscent of some kind of combination of Benjamin Burnley (Breaking Benjamin), Adam Gontier (ex-Three Days Grace) and Stone Sour-model Corey Taylor, he’s got a surprisingly good voice. “Bring Me Home” works with the heaviness of the rest of the record in providing a more ominous, subdued tone that gives the band’s sound more depth. The clean vocals fit in with the uncleans rather than feeling like an experiment for the sake of trying something new—a notable accomplishment for a band that’s been around for a decade.

But enough talk of clean vocals. If you’re a Whitechapel fan, you’re here looking for face-melting heaviness, and Mark Of The Blade definitely delivers. The album finds the sextet unexpectedly veering away from death metal and moving more toward groove metal the likes of Meshuggah. But despite these changes in sound, Whitechapel remain true to themselves, just with greater dynamism. Whether it’s the ultra groovy “Elitist Ones,” the purely instrumental epic “Brotherhood” or the shredding and stinging “Venomous,” Whitechapel bring the heat. Bozeman’s vocals don’t just range from visceral to smooth, but dramatically vary in rhythm throughout the entire record. There is so much more offered in this collection of 11 songs than we’ve seen of Whitechapel previously, making Mark Of The Blade an exciting milestone.