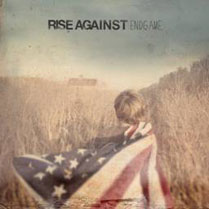 Sure, it may have sold half a million copies, but Rise Against’s Appeal To Reason was, in our humble opinion, a dud. The album was a slow, lumbering affair that seemingly betrayed the band’s natural melodic-hardcore predilections for a stronger chance at appealing to the Rock On The Range crowd. Obviously it worked, since the band are bigger than ever (and have punk legends like Rancid and Bad Religion opening for them), but we entered Endgame with a healthy dose of skepticism.

Thankfully, the band, aided by longtime producer Bill Stevenson (Descendents, Black Flag), have once again tapped into that intangible magic that makes them so great, and have delivered a full-on rager with Endgame. While song lengths continue to push (or in some cases exceed) a totally un-punk four minutes, RA make better use of their time this go ’round, with the crushing, riff-heavy “Midnight Hands” benefiting from frontman Tim McIlrath actually slowing down his vocal pace—you’ll hardly even realize it’s the longest song on the album at a hefty 4:18 (practically punk’s version of a Dave Matthews Band live cut).

McIlrath is as lyrically feisty as ever, and no track better displays his fervor than the album-opening “Architects,” where he takes Against Me!’s Tom Gabel to task by paraphrasing AM!’s “I Was A Teenage Anarchist,” singing, “Don’t you remember when we were young and we wanted to set the world on fire? ’Cause I am, and I still do.” McIlrath’s not taking the current stagnation of the punk scene lying down, instead deciding to fight apathy with as much energy as he can muster. “Survivor Guilt” incorporates dialogue from 1970 war film Catch-22, doing its best to let the listener know that no, America is not invincible, and if you really want change, you have go out and make it happen yourself. “Make It Stop (September’s Children)” borrows its reverb-guitar opening from Green Day’s “Boulevard Of Broken Dreams,” but McIlrath’s lyrics are more pointed than Billie Joe Armstrong’s have ever been, discussing the recent rash of bullying-related suicides and reading their names off as a children’s choir chillingly sings overtop.

Few bands go out of their way to be active in a socio-political setting, instead preferring to take their fans’ advice of “shut up and play,” but RA have never been content to take things lying down. That’s really why Rise Against are so important to rock on a large spectrum these days, and why it’s a relief that they made an album as strong as their ethics and beliefs this time around.