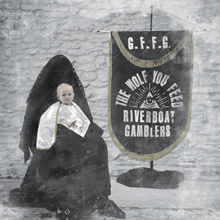 The Wolf You Feed

Riverboat Gamblers have been one of the most consistent (and consistently underappreciated) punk bands in the scene for more than a decade, expertly balancing force and swagger on their fifth album, The Wolf You Feed. The Austin, Texas, quintet vaguely resemble a recently graduated garage band on the opening 1-2 punch of “Good Veins” and “Bite My Tongue,” which dovetails nicely into the moodier, retrofied “Comedians.” The Gsmblers are at their best when the tempos are perpetually high, though; “Soliloquy” and “Blue Ghosts” both scorch like lost Rocket From The Crypt B-sides; on the other hand, the chamber pianos of “Gallows Bird” and the lackadaisical vocals from typically game frontman Mike Wiebe on “Loser Neck” cause those songs to plod a bit too much to remain interesting. The one curveball on The Wolf You Feed that works is closer “Eviction Notice,” a bouncy, minimalist effort that’s quick and catchy, and all told, an odd choice for a closing track. While it doesn’t possess the urgency of 2006’s To The Confusion Of Our Enemies or the seamlessly incorporated pop sensibilities of 2009’s Underneath The Owl, The Wolf You Feed is an admirable addition to the Gamblers’ discography.