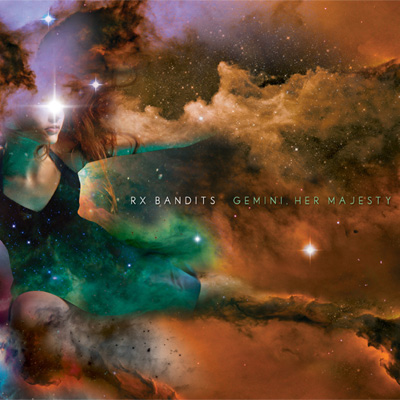 Rx Bandits spent several albums twisting and contorting the notions of modern ska-punk until it was no longer a recognizable part of their sound. Even before 2009's horn-depleted false farewell, Mandala, the band had earned the namesake “the Mars Vol-ska,” a pun either complimentary of their prog-rock liberties or derisive of their overindulgence, depending on who you'd ask. Mandala lied somewhere in the middle, with undeniably creative nuances, Latin music asides and jarring changes in course, but also frustratingly deficient of the powerful, punk-laden dynamism and enduring hooks of their earlier material. After playing special full-album shows in early 2010 and embarking on a supposedly final tour in the summer of 2011, it was easy to imagine them closing the book on an impressive career; they quickly backpedaled, though, claiming it was only their last tour. Of course, this wasn't true either, with a 10th anniversary jaunt celebrating their arguable high point, 2003's The Resignation, and a new covers EP (not to mention an ongoing co-headlining with the Dear Hunter).

Somewhere along the way, though, something must have sparked some creative rejuvenation. After a wildly successful PledgeMusic campaign that nearly doubled the band's goal to fund a new album, Rx Bandits emerge with Gemini, Her Majesty, a stronger effort that sonically calls back to 2006's …And The Battle Begun. No, they haven't reincorporated their departed brass section, but the extended instrumental jams are refreshingly toned down and the album packs a front-loaded half full of their best songs in years.

Gemini, Her Majesty's hardly leaps and bounds from the expected template the band's occasionally dented and reshaped, but subtle differences flare up. The Police-informed reggae slant makes an inviting return with jangly energy, the prog-rock riffing is now delivered with precision over excess, and subtle electronics dot the compositions for less overwrought, quietly kaleidoscopic and intricate displays. Frontman Matt Embree scales back hard on the sociopolitical matter, but he's as whispery and soulful as ever, still vulnerable to romantic lust (“Ruby Cumulous” has a hook reflecting the same one-night-stand temptation of Begun's “Only For The Night”) and able to belt out huge, inviting sing-alongs, sometimes with cosmic insight (“Stargazer”). The smoothly hazy, Slaughterhouse-Five-referencing “Will You Be Tomorrow” sounds like a sequel to Minus The Bear's “White Mystery,” alluding to interesting parallels between the two bands: Both started as promising masters of their respective genres and advanced tastefully into vaguely proggy, punk and soul-influenced rock that, at most live events, can deservedly whip a thousand college kids up into a frenzy.

After so many standout tracks like the abovementioned (and the alternately fun and jittery “G2G”), Gemini, Her Majesty winds down in a comparatively lacking (though hardly uninteresting) fashion. As a minor highlight, “1995” boasts a tense, almost grungy bridge. As minor lowlights, “Meow! Meow! Space Tiger” and “Penguin Marlin Brando” wield strangely playful titles but slightly less cohesive and overall compelling musical results than its predecessors. “Future, Buddy” even resorts to a somewhat lazy, repeated count-off towards the album's end. Still, Gemini, Her Majesty is by and large a step back towards the fertile brilliance that rightfully gained Rx Bandits exposure in the early 2000s, recapturing the jubilant mix of styles they deployed with so much fresh aggression and poise.