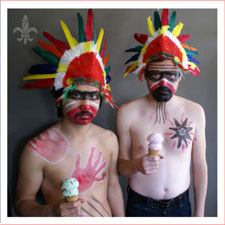 Red Scare Industries is on a bit of a roll. On the heels of that awesome new Menzingers album, Chamberlain Waits, comes Vultures United, an Orange County, California, hardcore band who don't take themselves too seriously, and are all the better for it. With a vocalist who obviously spent his younger years screaming along to American Nightmare and Refused, mixed with filthy power chords reminiscent of Black Flag, Savages doesn't let up from start to finish.

Taking cues from the late Kid Dynamite, Savages is as fun as a trampoline and intense as the twisted ankle sure to follow. On one side you have "Salon Girls," a goofy punk song about the hardships of hairdressers. But as you giggle over Vultures United's lyrical subject matter, "Shit Talk From Skull Mountain" smacks the smile off your face with pure, punk-rock intensity.

Vultures United occasionally take the silly too far. "3AM" is a spastic diatribe on the dangers of urban legend Bloody Mary, a gag just too juvenile to be funny. However, Savages contains so many totally kick-ass tracks, to dwell on its few shortcomings would be to miss the point completely.