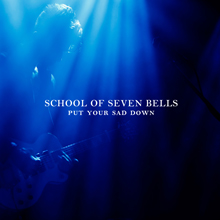 Put Your Sad Down EP

One might’ve expected a stylistic shift in School Of Seven Bells after Claudia Deheza left the band in 2010, just months after the release of their second album, Disconnect From Desire. But in recording this year’s follow-up, Ghostory, between tours the remaining duo of her twin sister Alejandra (“Alley”) Deheza and guitarist Ben Curtis (ex-Secret Machines) produced a very similar-sounding (and better) album. Multi-tracked vocals allowed Alley to harmonize with herself, while their blend of shimmering Cocteau Twins-brand texture, new-wave synths and drum-machine beats sounded as crisp and mesmerizing as anything they’d released. In subsequent interviews, Curtis and Alley downplayed Claudia’s role in the band in explaining the two music’s consistency across the two releases. Now, months later, they’ve released a five-song EP that indeed heralds a new tact, adopting a clubbier, more rhythmic—and less interesting—sound. Drums are way up in the mix while the bass-heavy throb has migrated from the ’80s into the ’90s. As a result there’s plenty of trebly breaks and gated bottom-end throb that hark back to early-’90s industrial-dance. For a band that relied so heavily on upper register sounds from Deheza’s misty cooing to the swirling keyboard washes and glimmering plumes of guitar, the loud reverberating rhythms have a dramatic grounding effect.

This earthy/ethereal tension is used to best effect on “Lovefingers.” It opens with a rumbling hook vaguely reminiscent of Eurythmics' “Sweet Dreams (Are Made Of This)” and builds into a spooky Eastern-tinged raga, its tribal thrum nicely balancing Deheza’s heavenly soprano. That’s where the good news ends as their dancefloor predilections prove cold, distancing and unimaginative, not to mention muddying the mix with an omnipresent rumble. The drumbeats get particularly indulgent on the nearly seven-minute tune “Painting a Memory,” which opens with an austere drum loop that is slowly embellished with samples in a song seriously in need of a montage sequence. We’re already two minutes in when the vocals begin. It’d be a decent track for the downslide of a late-night rave as everyone’s coming down, but drugs are about the only thing that could make anything this slow and repetitive interesting. “Painting A Memory”? Gimme a Polaroid!

The other long track, the nearly 13-minute title track fares better (though the drums sound like a cross between Phil Collins' “Sussudio” and Midnight Star’s “Freakazoid”). It too features an elongated build though it’s better structured to support its length. Still, it’s hard to sit through and you scratch your head when you hear Deheza and Curtis say they were more excited about this music than anything they’ve done. Deheza’s still a fine singer and there are plenty of interesting tones and sounds flitting across the background, but all it ever coalesces into is wan, directionless, dance rock. A dispiriting disappointment after the fine Ghostory