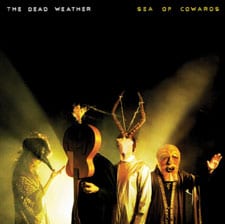 The Dead Weather's 2009 debut, Horehound, was teeming with surprises, possibilities and dirty, yet engaging blues-rock vibes that referenced the best rock music made in the 30 years prior to the release of the Rolling Stones' Exile On Main Street. Much of Sea Of Cowards is pretty on-point and burning: Vocalist Alison Mosshart (formerly of Discount, no matter how much she tries to deny it) still exhibits that stiletto-sharp swagger; Jack White's drumming never strays out of the pocket; and the contributions of guitarist/keyboardist Dean Fertita and bassist/drummer Jack Lawrence go a long way toward crafting the atmospheres that make the band so exciting. "I'm Mad" amazingly conjures everything from Buddy Guy, the Electric Flag, Killing Joke's "Change," and some vintage by-pass filters out of LCD Soundsystem's rehearsal space. White and Mosshart's tandem vocals on the brooding "Die By The Drop" sound like a couple with a Bonnie And Clyde deathwish. Lawrence's processed, sand-chewing bass tone on "Looking At The Invisible Man" finds the band in an electro mode that's acceptable to biker-bar denizens and guitar-rock snobs alike. Synthesizer sequences straight out of the mid-'80s pulse through the verses of "The Difference Between Us," before giving way to Fertita's six-stringed crunch.

So what's wrong? Well, forget critics: The Dead Weather can be their own worst enemy. Tracks like "Hustle And Cuss" and "Gasoline" sound like a DW cover band, using all of the signifiers, yet yielding none of the expected resonance. On "I Can't Hear You," Mosshart gets more histrionic than usual, ending up like the trash-rock analog of those American Idol dullards who routinely abuse melisima. The closing "Old Mary" ends the proceedings with White reciting a benediction of sorts a la the Catholic "Hail Mary" prayer, while Fertita backs him up with an organ riff that sounds lifted out of a late-'60s European horror film before coming to a lurching, arrhythmic close as if someone stabbed the Leslie cabinets the organ was running through. It's easily one of the band's best tracks. And that's what's so frustrating: It could have easily gone into darker, scarier narratives and/or sonic atmospheres but they shut it down at the near three-minute mark. Unnecessary brevity is a sticking point: Sea Of Cowards' 11 tracks run a little over 35 minutes.

Next time out, White & Co. should take a long vacation after they throw down their tracks, then come back, re-listen and see where the magic is going. Music fans can be like frustrated housewives–sometimes three minutes ain't gonna cut it…