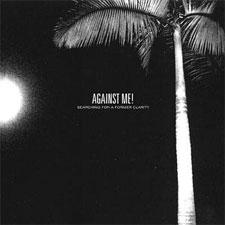 Searching For A Former Clarity

There’s a scene in Almost Famous where William Miller frantically phones Lester Bangs, asking what he should tell Rolling Stone about the progress of his story which is nowhere near completion, and Bangs says, “Tell him, ‘It’s a think piece about a mid-level band struggling with their own limitations in the harsh face of stardom.’” To parlay the quote into real life, Against Me! are that mid-level band, and Searching For A Former Clarity is their think piece.

Clarity is a (sort of) concept album loosely based around a (semi-) fictional version of AM! treading through the dangerous territory of signing to a major label, and the requisite aftereffects. Kicking off the album is the punk-rock vaudeville of “Miami,” with its instant-sing-along chorus and peppy horn section. The track, a sort of overture for the album, leads directly into “Mediocrity Gets You Pears (The Shaker),” a two and-a-half-minute rager with frontman Tom Gabel spitting out criticisms voiced against his band (e.g., “We really sold out the scene”). It’s difficult to see where Gabel is drawing the line between fact and fiction, which makes the album all the more personal.

“Unprotected Sex With Multiple Partners” is a diamond in a field of gems, with its Franz Ferdinand-esque dance-punk beat (no, seriously). Moments such as this, as well as the slow post-punk rumble of “Violence” and the punk-dub blend of “Justin,” show the band’s incredible musical maturation since their early 7-inches-these songs are completely fleshed out and built for a full band. With each listen, another layer is peeled off, whether it’s picking up a handclap here or a hammer-on there. J. Robbins should be commended for producing a fantastic-sounding album that retains Against Me!’s anarcho-punk sound.

While the theme of music-industry cynicism is always present, Gabel still takes time out to write some less thematic songs, like “Pretty Girls (The Mover)” (the best punk-rock unrequited-love song since Alkaline Trio’s “Clavicle”) and “From Her Lips To God’s Ears (The Energizer)” (a direct attack on Condoleezza Rice). He then enters darker territory with “How Low,” a country dirge about cocaine abuse, before steering the fictional band toward a revelation in “Even At Our Worst We’re Still Better Than Most (The Roller),” singing, “And we’ll give the money back to the record label… we got what it takes to make it.”

Of course, this isn’t Hollywood; and the final trio of songs finds the band trying to regain favor with their dwindling fanbase and living in denial about their downfall (“Is there something wrong with these songs? / Maybe there’s something wrong with the audience” from “Don’t Lose Touch”). As the album concludes with Gabel weakly squeezing out, “Let this be the end/Let this be the last song/Let this be the end/Let all be forgiven” over a quiet bass-drum thump, you can’t help but feel sorry for him-and thank whatever deity you pray to for keeping his band on an indie.