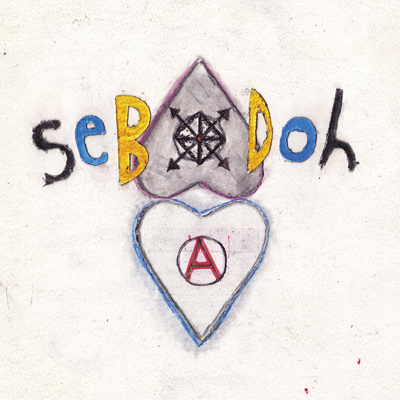 For a project that began its life as a lo-fi home recording project for Lou Barlow and his buddy Eric Gaffney, replete with wretched sound quality and interstitial samples and bits of noise, it's strange to consider that Defend Yourself could be the messiest album of Sebadoh's career. It's not just the music found on it, though that certainly has its fair share of sloppy playing and wobbly tempos that just barely stay on the rails. The center of this album—the first by the band in more than a decade—is a cluster of Barlow compositions that address the end of his marriage.

The news of this divorce might come with a bittersweet tang considering how many previous Sebadoh albums were concerned with Barlow's now ex-wife. In fact, you might be able to track the entire arc of their relationship using Sebadoh songs: from “Kath” on Sebadoh III (“I'm so glad I waited for this/Every nervous moment worth it”) to “Tree” from their 1999 album The Sebadoh (“We'll see it through/The future, here and now/Me and you”) to the opening track on Defend, “I Will” (“Things have changed, no longer need to be with you/I'm still the same, and if it's leaving I must do to be true/I will”). Barlow is, of course, not alone on this album. His longtime musical partner Jason Lowenstein gets his own shots in on Defend Yourself, and his concerns are the same as those of his bandmate. But in these cases, the victim here is Jason. On the furious title track and the Uncle Tupelo-like ramble of “Can't Depend,” he cowers in the presence of an unknown alpha female (“Why are you dumping on me?/Can't you see that I'm small?”).

So, yes, in many ways, this is your prototypical Sebadoh record, right down to the quiet/loud dynamics, shamelessly heartfelt singing and a punch-drunk quality that goes down well with a can of cheap beer and a Marlboro. The only question that remains is if a modern audience will respond to it in the wake of blog confessionals and tear-stained selfies. There's a universality to these tales of heartbreak and woe that will likely strike a chord, and the music is sturdy enough to avoid being brushed aside as ’90s nostalgia. Embraced by the masses or resigned to cult status, Sebadoh's reunion is a welcome one, and this strong album is a fine return to peak period form.