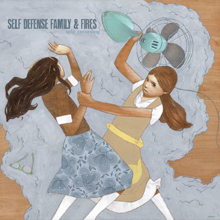 Self Defense Family (né End Of A Year) release a shit-ton of music. It's hard to even quantify how many EPs and splits they've released this year alone, but they often tend to be worth one's while. This particular split with Fires is no different.

Self Defense Family's two contributions here seem to focus generously on the interaction between eccentric frontman Patrick Kindlon and whatever guitarist is laying the groundwork. While they've long grown out of the Revolution Summer pigeonholing, the nearly lo-fi “I Can't Work A Straight Job” is actually a bit of a throwback for them. Kindlon barks his trademark talk-shout in deliberate measures while a guitarist lays down the kind of steady, minimal strum Guy Picciotto would instill a warm foundation with.

But then, the more crisp-sounding “M1911,” written by band member E. Tobin, finds the band back in their forward-thinking musical mode. If there's such a thing as story folk, this is probably it, with a thematic spirit akin to “I Heard Crime Gets You Off,” from their recent entry in Run For Cover Records' 7-inch singles series. It's lyrically poetic and musically light, with Kindlon calmly telling a tale of a troubled everyman taking a wrong turn in life as one of their guitarists gently plucks an acoustic. An interesting narrative, for sure.

The comparatively straightforward Fires offer the modestly recorded “Things We Lost In The Sea,” a yelping emo dirge that starts with ’90s slowcore sadness and finds hope as it goes along. Imagine a mixture of Mineral, early On The Might Of Princes and Red House Painters, but with more jarring vocals. While the payoff following the song’s twinkly build could be more impressive and fulfilling, it's an effective contrast of sharper yelps and muffled guitar atmosphere.

Self Defense Family’s “I Can’t Work A Straight Job”