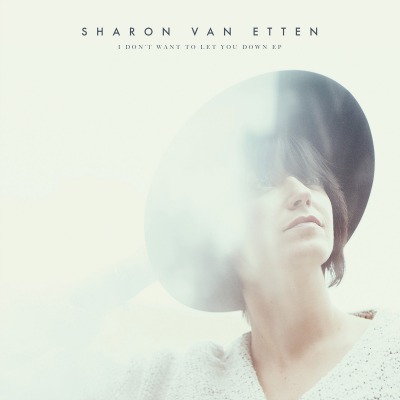 The album artwork for Sharon Van Etten’s last two records was saturated with chiaroscuro, be it Tramp’s tight close-up or Are We There ‘s shot of a driver leaning out the window, a suburban landscape in the background. Her new EP, I Don’t Want to Let You Down, departs from that formula with a glossy photo of Van Etten in a broad, Beck-channeling hat striking the 2008 Obama pose, lens flare obscuring half her face. The only black comes from her brim, the negative space white this time around.

It’s fitting then that the first track kicks off with Van Etten singing “When dreams grew black, I didn't want to see the light.” She’s always been confessional, and has made no effort to hide  the lingering skeletons that help drive her songwriting, and “I Don’t Want to Let You Down” continues that candor. Her honest voice remains her greatest strength, and she crafts a mixture of vulnerability and assuredness that fully sells lines like “Don’t shout it, stay/I don’t want you to let you down.”

Love has been a frequent topic for Van Etten, especially its forlorn incarnations. All that everyone wants may simply to be loved, but Van Etten seems particularly fascinated with the truth that not everyone gets to be. Her songs’ subjects fear disappointment, their own self-destructive tendencies and abandonment, and these fears are all-consuming until they define them. Despite the sunshine on the cover, these are decidedly late night songs. They are meant to be paired with bitter red wine and the resigned sadness that comes from remembering romantic failures. “You know I always fall apart/ It’s not my fault/ It’s just my flaw/ It’s who I am,” Van Etten sings on “I Always Fall Apart” while backed by heartbroken strings that recall The National’s more orchestral moments. “I can’t believe the way I’ve been/ I’ve been resentful and have sinned,” she adds before pleading for companionship. It’s unclear whether the subject has been wronged or done the wronging; the truth lies somewhere in the middle.

That isn’t to say that the album is overly dark, but it is miles from a bouquet of rainbows. She sings about the marginalized lovers that Springsteen explored throughout his career, but her brush paints more impressionistic. It is a somber affair, but the instrumentation stops the record from too much navel gazing.

It’s notable that this album is backed by Van Etten’s touring band, and while there is nothing as immediate as “Your Love is Killing Me” or “Every Time the Sun Comes Up,” there’s a comfortable confidence in the sound. I Don’t Want To Let You Down isn’t anything outrageous or inventive, but it’s still a step forward. Strings appear on two tracks to great effect, especially when paired with the piano and organ that drive “Just Like Blood,” the track most likely to close out an episode of a prestige cable drama.

The EP finishes with a live rendition of “Tell Me,” which was released as a demo back in 2012. The original was an affecting but slight song, showcasing Van Etten’s emotive voice with nothing but an acoustic guitar. The version included here was recorded during a show in Barcelona, and is the closest the EP comes to a misstep, which is to say it’s still a good song. The band fleshes it out but Van Etten doesn’t sing with as much power in this recording. While that strength is missed, she still manages a punch with her candid elegance.

The EP is a brisk 22 minutes, but it is more than a brief release to hold fans over while they wait for her next record. The current music landscape is decidedly album-focused, so there is something purposeful about deciding these five tracks shouldn’t be put off or released as B-sides. With them, Van Etten cements herself as the auteur of the symphonically sad.