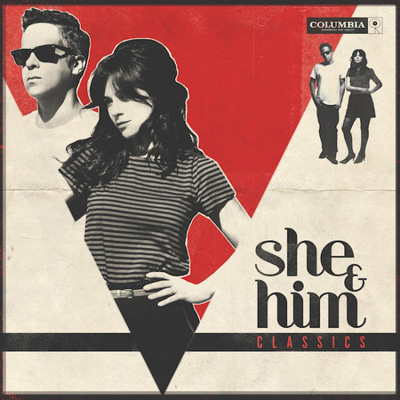 It’s really a wonder that She & Him didn’t record an album like this sooner. This is, after all, an outfit who have spent their existence fighting against the modern tide, with a transistor radio-ready pop and country throwback sound that should be familiar to anyone with a musty Burt Bacharach or Skeeter Davis record in their collections. What took Zooey Deschanel and M. Ward so long to do a full tribute to their varied influences?

The duo and their collaborators do themselves a great service by losing the stiffness that was evident through the first three Volumes of their recorded work. They accomplished this in the simplest fashion possible: by recording everything live. That decision helped bring a playful quality to many of the performances, particularly Deschanel who exhibits some audible delight at being able to coo her way through Dusty Springfield’s “Stay Awhile” and the jazz standard “Time After Time.” And the swinging arrangements that Ward & Co. cooked up for each tune feel as warm and lucid as a 45 pressed in the ’60s.

She & Him also make some smart choices with regards to song selection, avoiding any kitschy covers and completely eschew adapting any modern tunes to their aesthetic. In fact, the most current material they work with—Charles Aznavour’s “She”—is from 1974, and is a song that sounded almost nothing like the Anne Murray and John Denver track dominating the Adult Contemporary charts at the time. Beyond that, they stick to pop standards associated with your great-grandparents’ favorite singers like Jo Stafford, Ella Fitzgerald and Kay Starr.

Things get a little dicier when they dip into the ’60s, as Deschanel doesn’t have the pipes to match up with the likes of Maxine Brown and Bill Medley of the Righteous Brothers (S&H covers their respective classics “Oh No Not My Baby” and “Unchained Melody”). They also make a complete muddle of Bacharach’s classic “This Guy’s In Love With You” by swapping the gender pronouns in the lyrics and giving it a uncomfortably peppy swing.

Throughout the rest of Classics, though, Deschanel is a delight, at times coy and romantic, and in other moments, moody and pensive. The live recording also puts some extra emphasis on her use of vibrato throughout, a bit of tonal color that adds richness and variety to her vocal performances and the album as a whole.