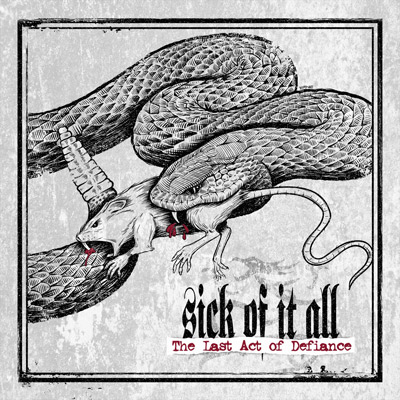 Sick Of It All

The Last Act Of Defiance

It's all a bit predictable with NYHC legends Sick Of It All, ain't it? Another album (their 10th) that is firmly four stars out of five, can't really go any higher, can't really go any lower, because the sound is so set in stone that, well, any sort of upward or downward movement just ain't allowed. And, really, no one does it better than these guys. While other old-school NYHC hardcore bands have a waft of fromage floating off the gang chants and breakdowns, SOIA have always managed to just rip and shred.

Take, for example, the first riff of “Road Less Traveled,” the best high-speed pummeling groove you'll hear all year. Or the excellent, frantic opener, “Sound The Alarm,” “2061”'s pure old-school chant-along… and there you have it, the first three songs all winners, all songs you can sing along with the first time you hear them, all perfectly SOIA.

But the band manage to still sound vital and fresh. Sometimes when older hardcore bands are still going for it, the anger starts to sound a bit forced, a bit silly. Sometimes when it's too real, it just sounds like damaged individuals and isn't a whole lot of fun to listen to. SOIA just sound honest, and while they are probably actually a bunch of nice fellas to run into in a dark alley, the music still has a sincerity to it that many bands can learn from. And speaking of bands getting older, the hilariously titled “Act Your Age” features the band raging hard for 1:28, certainly not acting their age (plus, when they throw down the lyrics about how you're wearing a T-shirt of “a straight-edge band/that sucked!” it's just too hilarious to not get caught up in).

About the only complaint that longtime fans can level against the band is a slight leaning towards metallic hardcore versus NYHC over the years, a sound that is at times heard here, sure; the riffing on “Get Bronx” (did we mention this is NYHC?) approaches old-school crossover approaching old-school thrash approaching… ah, who cares, the surprisingly bouncy old-school punk/HC late-album double-hitter of “Beltway Gateway” and “DNC” balances out any riffs that approach the metallic edge of Hatebreed. And really, the fun of SOIA rests in that balance anyway, a balance they've laid down with perfection, once again, with this album.