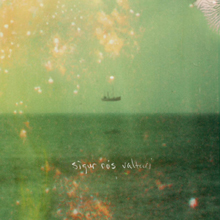 As if symbolic of their space-filled music, Iceland’s Sigur Rós took a four-year break between their last studio album and the new Valtari. During that time, frontman Jónsi made a solo disc, The band released a couple stopgaps and a volcano near Eyjafjallajökull erupted numerous times, unleashing a massive cloud of ash that blanketed Iceland throughout the autumn of 2010. If Valtari is any indication, that cloud still lingers—at least in the headspace of Jónsi and crew. A fog of fugue-like harmonies opens “Ég Anda,” setting the tone for a ringing, expressionistic echo-poem that resembles a wind chime made of icicles. Things cohere in “Ekki Múkk,” but only barely. With a shivering string section that hovers under Jónsi’s angelic birdcall, it’s only loosely tethered to sad, isolated plunks of piano. The mood accumulates into a dizzying orchestral shimmer on the title track before dropping off into the ethereal “Fjögur Píanó,” Valtari’s instrumental, almost nonexistent closer. Drummer Orri Páll Dýrason is mostly absent throughout the album; free of percussive punctuation, the songs are run-on sentences that fade too often into the blank page around them. Then again, that’s always been Sigur Rós’ strength: building epic, sky-scraping anthems out of an inexorable procession of nothingness. While not a major departure, Valtari adds a fresh, ghostly layer to Sigur Rós’ slow-motion sprawl.