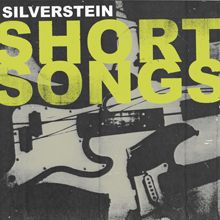 This review originally ran in AP 284.

Silverstein have become contemporary screamo’s answer to Less Than Jake—a hard-working, hard-touring band whose commercial success peaked a few records ago, but are still capable of delivering a new batch of anthems every few years. But what happens when they get bored with the traditional album format? Similar to LTJ’s TV theme-song collection, TV/EP, Silverstein’s Short Songs is an excellent way for the band to challenge themselves with a unique idea—in this case, writing 11 sub-90-second songs, and pairing them with an equal amount of their favorite bands’ shortest material. The A-side is Silverstein’s Greatest Hits for the ADD generation; you get speedy punk (“Sin & Redemption”), plenty of mosh-pit fodder (“La Marseillaise”) and a full-on power ballad with a swelling string section, natch (“Sleep Around”). Each track is surprisingly memorable, given its time constraints. The B-side plays out like a late-’90s high school mixtape, as brutal power violence (Orchid’s “Destination: Blood!”) and ’80s hardcore (Gorilla Biscuits’ “Good Intentions”) rub shoulders with Canadian pop-punk (Chixdiggit!’s “Quit Your Job”) and second-wave emo (the Promise Ring’s “Scenes From Parisian Life”). It’s more than a bit schizophrenic—which is half the fun.