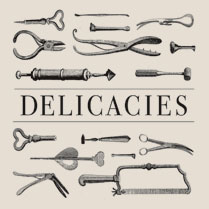 During the past five-plus years, British production duo Simian Mobile Disco have earned a rep for serving up schizoid combinations of pop and dance music considered delicacies of each genre. With 2007’s Attack Decay Sustain Release and last year’s Temporary Pleasure, plaudits rained down for the wide-ranging approaches to sampling, collaborations (Gossip’s Beth Ditto and Jamie Lidell among them), and a dedication to the bottom line, as in the one that thumps and shakes. Apparently, that brand of pleasure was temporary indeed.

Delicacies, a collection of singles teased out throughout 2010 via their Delicatessen label, adds intrigue by naming each track after an otherworldly dish like “Casu Marzu,” an Italian sheep’s milk cheese pocked with insect larvae. This intriguing, if somewhat putrid, concept doesn’t figure into equally refined sounds, however. For the aforementioned, it’s an eight-minute minimalist techno slog with none of the humanized flourishes of prior works, and the theme is much the same elsewhere.

A handful of the other Delicacies prove to be edible. “Hákarl,” aka fermented shark, emanates with a blackness rarely explored in SMD’s cheeky past, and shudders with enough tension to score a Japanese horror flick. The sparkling opening of “Aspic” (a meat-flavored jelly) isn’t bad either. Over its life, the track more than proves its thudding, pinging worth—in techno terms. Trouble is, a group known as part of a vibrant electronic collective including Basement Jaxx, Justice and Daft Punk can’t help but be compared unfavorably to their past when some of the best-loved aspects of melody and nuance are stripped away. For a young, non-jaded Pantha Du Prince fan, though, this could resonate yet.