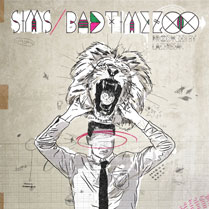 Minneapolis isn’t just for rockers. The city that birthed the Replacements has spit out some more bastards of young, this time of the hip-hop persuasion. Twin Cities MC Sims is in line with underground rappers like Atmosphere and Brother Ali, where politics and everyday life replaces clever descriptions of gunplay and re-ups. Loosely based on a short story by Ray Bradbury about a nursery transforming into a violent African veldt, Bad Time Zoo finds Sims confidently tying themes of claustrophobia and survival to tales of stray bullets (“The Veldt”) and revolution (“Burn it Down”). While this may sound like an Oprah Book Club selection, it’s Sims entertaining flow and producer Lazerbeak’s ability to switch between dancefloor packers (“Weight”) and worldly drum-circle loops (“Future Shock”) which takes Bad Time Zoo through the ceiling.